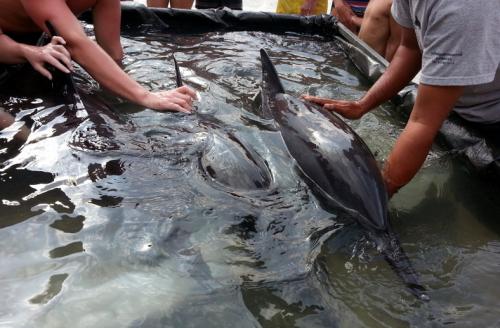 PHUKET: The three Spotted dolphins that beached themselves on February 7 in Khao Lak have not returned to land after being treated and released back into the sea, Patcharaporn Kaewmong, a veterinarian at the Phuket Marine Biological Center (PMBC) confirmed to the Phuket Gazette.

“I think they are safe since they have not come back to us,” said Dr Patcharaporn.

When the dolphins beached themselves, Dr Kongkiat Kittiwattanawong, of the PMBC’s Endangered Species Unit (ESU) was alerted of the situation and went immediately to the scene.

“We went to the beach in front of the JW Marriott Khao Lak Resort & Spa. By the time we arrived, the dolphins had been moved by Khao Lak and Pak Weep rescue workers to a pool,” Dr Kongkiat said.

The dolphins were all females, about 2 meters long and weighing 40 to 50 kilograms. They were weak and one of them had scratches on its skin, he said.

Dr Kongkiat believes the dolphins might have swum to shore because they had grown tired and were separated from their pod.

The veterinarians treated them with vitamins and antibiotics before releasing them back into the sea 500 meters from shore.

Six busted with 1.5 million in drugs in Phang Nga, north of Phuket