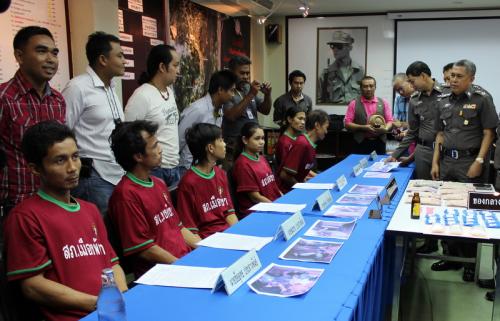 PHUKET: Police busted a drug ring yesterday, netting drugs with a street value of about 1.5 million baht when they arrested six drug dealers with ya bah (methamphetamine), ya ice (crystal methamphetamine) and cough syrup in Phang Nga, north of Phuket.

Acting on a tip-off, police went to the home of Chaiyuth Prasanphan, 35, and his brother Somchai Prasanphan, 40, in the Muang District of Phang Nga.

Also in the house were Boonyawee Wareesri and Thanawat Petchkliang, both 27 years old, who confessed that they were visiting Mr Chaiyuth and Mr Somchai with the intention of using drugs.

“We questioned the four of them and found out that two men who live nearby, Bulard Boontem, 52, and his son, Natee Boontem, 26, were also involved in the drug distribution process,” Maj Gen Chalit added.

“So we went to their house and arrested them after finding 600 more ya bah pills and 146,480 baht. They confessed to using and distributing drugs,” he said.

“The items we seized are worth over 1.5 million baht,” Maj Gen Chalit added.

All six suspects were charged with the possession, use, sale and distribution of a class 1 narcotic.

Mr Wareesri, Mr Petchkliang, Mr Chaiyuth and Mr Somchai were additionally charged with the illegal distribution of a pharmaceutical product – the cough syrup.

Motorbike with sidecar backslides down hill and flips, killing one