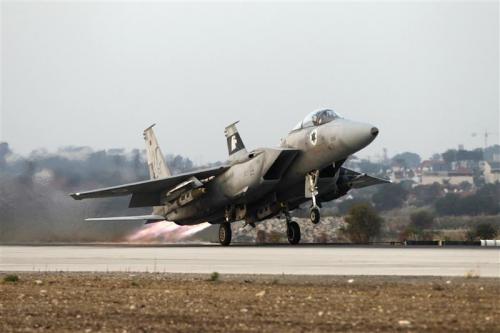 Israel, while declining to confirm the strike, stressed its focus was to deny its Lebanese foes new Iranian firepower and not take sides between Assad, long seen as a toothless adversary, and rebels who have won sympathy from Israel’s Western allies but who also include al Qaeda Islamists hostile to the Jewish state.

It appears to calculate that Assad will not risk forces he needs to fight the rebels by attacking a much stronger Israel.

Syrian state television said the bombing around a military research facility at Jamraya caused “many civilian casualties and widespread damage” and quoted a letter from the foreign minister to the United Nations saying: “The blatant Israeli aggression has the aim to provide direct military support to the terrorist groups after they failed to control territory.”

People living near the Jamraya base spoke of explosions over several hours in various places near Damascus, including a town housing senior officials: “Night turned into day,” one man told Reuters from his home near Jamraya, also struck on January 30.

A confidant of Israeli Prime Minister Benjamin Netanyahu said Israel hoped that by not confirming its attack, it would not force its enemies into serious retaliation. There was little response from Hezbollah, Syria or Iran to an earlier attack on the Jamraya compound, near the Lebanese border, on January 30.

After an Israeli strike on Friday, U.S. President Barack Obama defended Israel’s right to defend itself from Hezbollah, which fired many rockets into Israel during a war in 2006.

A Western intelligence source told Reuters: “In last night’s attack, as in the previous one, what was attacked were stores of Fateh-110 missiles that were in transit from Iran to Hezbollah.”

Hezbollah in Lebanon declined immediate comment. Iran denied that the attack was on armaments bound for Lebanon.

Israel has long sought to block Hezbollah’s land, sea and air transport from Iran and frets such new missiles could give the Shi’ite militants, who share in Lebanon’s government, the ability to strike its Tel Aviv conurbation with some accuracy.

Given the confusion among world powers, he added, Israel was only trying to protect its own interests and saw little to be gained by trying to influence the outcome of Syria’s civil war.

“The world is helplessly looking at events in Syria,” he told Army Radio. “That is why, as in the past, we are left with our own interests, protecting them with determination – and without getting too involved.”

It was unclear whether Israel sought U.S. approval for the action; in the past, officials have indicated that Israel sees a need only to inform Washington once such a mission is under way.

Netanyahu and Obama have had a fraught relationship in past years, as Washington seeks to hold Israel back from any attack on Iran’s nuclear programme while diplomatic moves continue.

At a routine public appearance on Sunday, Netanyahu made no direct reference to the strikes in Syria but spoke pointedly of his responsibility to ensure Israel’s future.

He maintained a plan to fly to China later in the day, suggesting he did not expect a major escalation. However, a military source said the army had deployed more anti-missile defence systems near the northern borders in recent days.

Video footage uploaded onto the Internet by Syrian activists showed a series of blasts. One lit up the skyline of Damascus, while another sent up a tower of flames and secondary blasts.

Syrian state news agency SANA said Israeli aircraft struck in three places: northeast of Jamraya; the town of Maysaloun on the Lebanese border; and the nearby Dimas air base.

“The sky was red all night. We didn’t sleep a single second. The explosions started after midnight and continued through the night,” one man told Reuters from Hameh, close to Jamraya.

“There were explosions on all sides of my house,” he added, saying people hid in basements during the events. In the centre of Damascus, people at first thought there was an earthquake.

Hezbollah’s Al-Manar television aired footage showing a flattened building spread over the size of a football pitch, with smoke rising from rubble containing shell fragments. It did not identify where the film was shot.

The streets of central Damascus were almost empty of pedestrians and traffic on Sunday morning, the start of the working week. Checkpoints that have protected the area from rebel attack appeared to have been reinforced.

Some opposition activists said they were glad strikes may weaken Assad, even if few Syrians have any liking for Israel.

“We don’t care who did it,” said Rania al-Midania in Damascus. “We care that those weapons are no longer there to kill us.”

But in Israel, Netanyahu ally Hanegbi spoke of relative indifference in its attitude to the rebels and Assad, who had maintained a standoff with Israel that dated from the time of his father, who led Syria in its last war with its neighbour in 1973: “We have no interest because we have no ability to assess what is good for us regarding the future regime,” Hanegbi said.

Netanyahu appeared at the dedication of a highway junction in memory of his late father. He made no reference to raids but said his father “taught me that the greatest responsibility we have is to ensure Israel’s security and guarantee its future”.

With just one result left to declare, the National Front had won 133 seats in the 222-member parliament, falling well short of the two-thirds majority that Najib had aimed to capture in Sunday’s election.

The 59-year-old prime minister could now come under pressure from conservatives in his own ruling party for not delivering a stronger majority despite a robust economy and a $2.6 billion (1.66 billion pounds) deluge of social handouts to poor families.
< — Phuket Gazette Editors