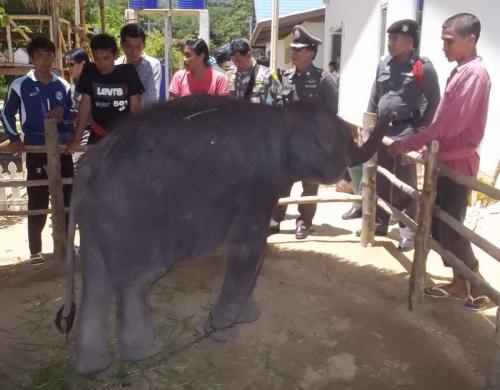 The news follows raids on elephant trekking companies in Phang Nga, north of Phuket, earlier this week, during which officers identified 40 elephants they suspect are illegal (story here).

The trekking camps are well known for providing popular day-trip excursions for thousands of tourists on holiday in Phuket.

“We identified a total of 26 elephants that we suspect were acquired illegally. We also discovered a white-handed gibbon and a pileated gibbon that we are now checking,” he added.

“We questioned the tour company operators and asked to check the registration documents. We still have to conduct further investigations to learn more about where the elephants and gibbons came from and whether or not the tour companies have the right to keep them,” Col Watcharin said.

“If we find out the elephants are illegal, we will press serious charges against the tour operators,” he said.

Col Watcharin also warned that he is assembling a team of about 100 officers to conduct further investigations.