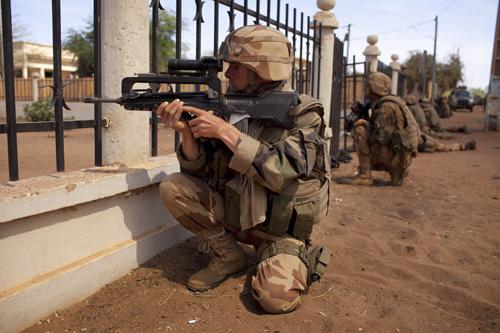 PHUKET: French and Malian troops fought Islamists on the streets of Gao and a car bomb exploded in Kidal yesterday, as fighting showed little sign of abating weeks before France plans to start withdrawing some forces.

Reuters reporters in Gao in the country’s desert north said French and Malian forces fired at the mayor’s office with heavy machine-guns after Islamists were reported to have infiltrated the Niger River town during a night of explosions and gunfire.

French Defense Minister Jean-Yves Le Drian told a news conference in Brussels that Gao was back under control after clashes earlier in the day.

“Malian troops supported by French soldiers killed five jihadists and the situation is back to normal,” he said.

French troops dispatched to root out rebels with links to al Qaeda swiftly retook northern towns last month. But they now risk being bogged down in a guerrilla conflict as they try to help Mali’s weak army counter bombings and raids.

“There was an infiltration by Islamists overnight and there is shooting all over the place,” Sadou Harouna Diallo, Gao’s mayor, told Reuters by telephone earlier in the day, saying he was not in his office at the time.

Gao is a French hub for operations in the Kidal region, about 300 km (190 miles) northeast, where many Islamist leaders are thought to have retreated and foreign hostages may be held.

“They are black and two were disguised as women,” a Malian soldier in Gao who gave his name only as Sergeant Assak told Reuters during a pause in heavy gunfire around Independence Square.

Six Malian military pickups were deployed in the square and opened fire on the mayor’s office with the heavy machine-guns. Two injured soldiers were taken away in an ambulance.

French troops in armored vehicles later joined the battle as it spilled out into the warren of sandy streets, where, two weeks ago, they also fought for hours against Islamists who had infiltrated the town via the nearby river.

Helicopters clattered over the mayor’s office, while a nearby local government office and petrol station was on fire.

A Gao resident said he heard an explosion and then saw a Malian military vehicle on fire in a nearby street.

Paris has said it plans to start withdrawing some of its 4,000 troops from Mali next month. But rebels have fought back against Mali’s weak and divided army, and African forces due to take over the French role are not yet in place.

Islamists abandoned the main towns they held but French and Malian forces have said there are pockets of Islamist resistance across the north, which is about the size of France.