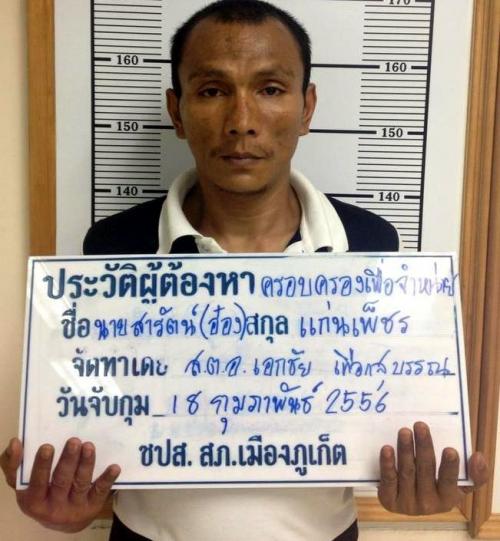 “During the arrest, Witoon ‘Bang Ann’ Piwluang took the gun from one of my men,” said Lt Col Parinya, the case investigator

“He pointed the gun at me and pulled the trigger,” Lt Col Parinya said. “But it was locked, so I pushed the gun away.”

Col Parinya and another officer received minor injuries in the ensuing scuffle.

“We sent an agent to buy drugs from him by the road, close to the entrance to Saphan Hin (map here), at 9pm on February 18, ” Col Parinya said.

Mr Kaenphet was arrested in possession of five grams of ya ice (crystal methamphetamine).

The next day, police searched Mr Kaenphet’s house in Cherng Talay and seized more than 3,000 pills of yah bah (methamphetamine) 500 grams of ya ice and 500 grams of heroin, Col Arayapan stated.

Police also found 70,000 baht and a bank book indicating there was 700,000 baht in the account. In addition, investigators seized a car from Mr Kaenphet’s property.

Acting on information supplied by Mr Kaenphet, police arrested Witoon ‘Bang Ann’ Piwluang in Cherng Talay the following day, February 20, with over 3,600 ya bah pills and over 5 grams of ya ice.

Mr Witoon was charged with resisting arrest and attempting to murder a police officer, Col Arayapan said. Additionally he faces charges of possession of category 1 drugs with intent to sell.

Mr Kaenphet was charged with possession of category 1 drugs with intent to sell, Col Arayapan stated.

Police successfully netted over 500 grams of ya ice , more than 6,700 ya bah pills and 500 grams of heroin from the raids.