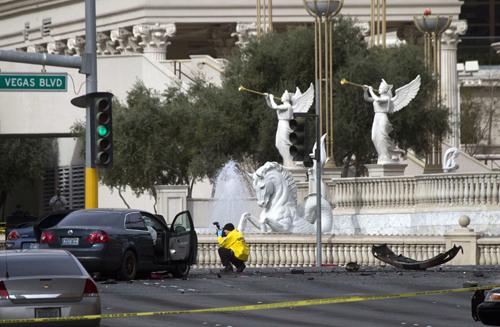 PHUKET: Three people died in the heart of the Las Vegas Strip yesterday when one or more gunmen in a Range Rover sport utility vehicle opened fire on a Maserati, killing the driver and touching off a fiery multi-car crash.

The driver of the Maserati died in the pre-dawn shooting, and his car veered out of control and smashed into a taxi carrying two people, Las Vegas Metropolitan Police spokesman Officer Jose Hernandez said.

The cab exploded into flames in the intersection of Las Vegas Boulevard and Flamingo Road, a popular tourist area in front of several casino resorts, killing the driver and a passenger.

“There was a loud bang and I hear two other booms. I looked out my window at Caesars Palace … and could see the fireball,” witness John Lamb was quoted as saying on the website of Las Vegas KLAS-TV’s 8News Now.

The gunfire and collision in the busy intersection near the Bellagio and Caesar’s Palace hotels triggered another crash involving four other vehicles, in which at least four people were injured, Hernandez said. The Range Rover sped from the scene.

Authorities said the shooting was believed to have stemmed from a fight in the valet area of the Aria Resort and Casino on the Strip, but investigators had not established a motive.

Representatives for MGM Resorts International, which owns the Aria, declined to comment on specifics of the incident.

“Each of our resorts employs fully trained, full-time, professional security departments and our extensive surveillance systems provide law enforcement with valuable assistance, often helping them close cases quickly,” Gordon Absher, vice president of public affairs, said in a written statement. “We continue to work closely with Metro on this investigation.”

An injured passenger in the sports car and three people hurt in the crashes were taken to University Medical Center. A hospital spokeswoman said three had been treated and released, though declined to provide information about the fourth person.

Clark County Sheriff Douglas Gillespie told reporters at an afternoon news conference that police had few leads on the Range Rover or its occupants, who were considered “armed and dangerous,” but had launched a multi-state search and were seeking help from the public.