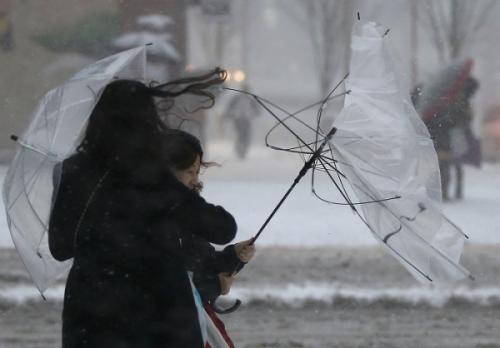 
Eleven dead after worst snowfall in decades hits Tokyo
Reuters / Phuket Gazette
PHUKET: Eleven people died, more than a thousand were injured and tens of thousands lost power when the worst snowstorm in decades hit Tokyo and areas around the Japanese capital before heading north to blanket the tsunami-hit Pacific coast.

Flights were still backed up at Tokyo’s Haneda international airport on Monday and the lobby was packed with anxious travellers, with some flights overbooked.

As much as 27 cm (10.6 inches) of snow fell on Tokyo by late Saturday, the most in 45 years, Japan’s Meteorological Agency said. Back streets in outlying neighbourhoods remained choked with snow and frozen slush on Monday morning, forcing commuters in heavy boots to pick their way carefully to work.

Financial markets opened normally on Monday despite the heavy snowfall.

Traffic accidents and falls claimed 11 lives across the nation, including one 78-year-old man in Ichikawa, just east of Tokyo. More than 1,000 were injured, among them a 69-year-old man in critical condition after slipping and striking his head at his front doorstep while shovelling snow.

Some 5,000 people were stuck at Narita international airport at the weekend when the snow cut transport links to downtown Tokyo.

More than 20,000 households were without electricity early on Sunday after the snow and high winds took down power lines.

Several universities delayed the start of their entrance exams. The snowy streets also may have discouraged voters from going to the polls on Sunday to choose a new Tokyo governor, with turnout rates hovering around 46 percent, the third lowest in history.

Powering north, the storm dumped 35 cm of snow on the city of Sendai, parts of which were devastated by the March 2011 tsunami. It was the heaviest snowfall recorded there in 78 years.