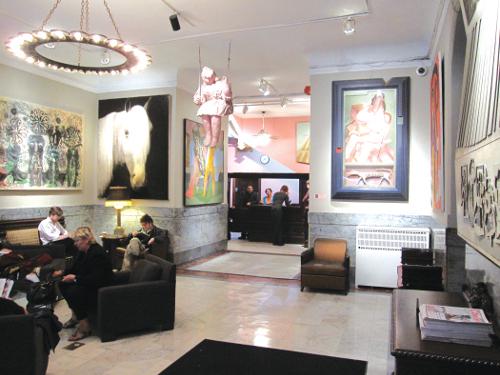 PHUKET: Did you get the memo? For god’s sake, why didn’t you just fall into line and do like everyone else does? Like it or not, hotel life can pretty much be summed up in these two sentences; Go to work, disconnect all logic and brainpower and just follow the leader like a xanaxed-out flock of sheep.

A few days ago I came across an article in the LA Times online quoting a recent TripAdvisor.com survey which compared US traveller’s ranking of in room mini-bars versus free WiFi. About 89 per cent voted to hit the high surf of the internet. Of course, we have to factor this being an American-based survey but what it does call into question is the enormous weight that hotel management, chains and owners place on the simple four walls of a hotel room.

Back in the old days, hotels grew out of pubs and the reality of the area planning was that the ground floor space for meeting, greeting, eating and drinking just happened to have a place to crash out on top. This was before television, which of course, changed everything. Though today you might argue that the tube is only an ant in terms of encouraging anti-social behavior when compared with smartphones – for anyone who has sat at a table for hours and not even interacted with their fellow travellers will attest. We do need to remove relatives, co-workers and people we don’t want to speak to at all, which is where the charade of checking the imaginary urgent emails becomes unraveled once the person next to you realizes you are really just checking out new iPhone apps.

But let’s get back to the mini-bar and what’s really happening on the ground. There has been a marked resurgence of hotel guests spending time in the great rooms or lobby type areas which offer those Starbuck-like warm and fuzzy moments. Sure, no one is talking there either, but it’s just the mere existence and human need of having people nearby which wedges us from under that toasty-warm duvet and massive HD TV in an otherwise unmemorable hotel room.

Let’s review the current bunch of buzzwords and trending hash tags – authentic, experiential, and millennial and all those other pseudo-socio-cultural descriptions that now attach themselves to the once-simple act of staying at a hotel. There has to be something to all this though, as lately I often find myself wandering outside the room in hotels – looking to go local and try to fit into the vibe of my surroundings.

So the question remains, why on earth do hoteliers continue to focus on hotel rooms only and allow the other 50 to 60 per cent of the other spaces in their resort remain an afterthought? So much is concentrated on perfecting the “sleep experience” that the missing link of public or shared areas are overlooked. Go back and look at the pub, where a good night did not mean spending twelve hours in solitary confinement.

We seem to have lost the art of programming out of room experiences in other areas. Restaurants have no choice but to do this, but hotels continue to flounder in the ever-deepening footsteps of the other sheep. Over the past year, we have heard from global chains like Hilton that room service in many of their hotels is under review. So again, here is another guest room geared experience that may diminish in time. Go forbid, hotel guests may eventually have to eat with each other and possibly even interact with staff and other travellers.

Getting back to basics is never a bad thing and the journey from the simple pub to the modern hotel has been a massive undertaking, and yet I have to ask, is it time to get back to basics? I’d much rather side up to a bar than reach into an overpriced sterile mini-refrigerator anytime. What about you?

Bill Barnett is Managing Director of C9Hotelworks. He can be contacted through c9hotelworks.com