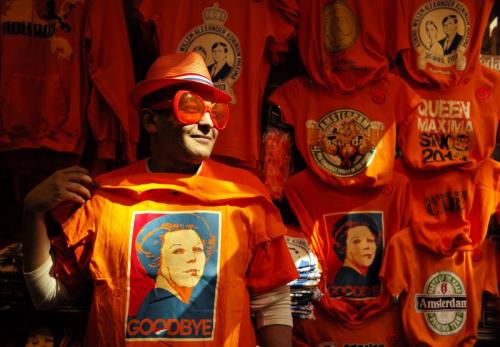 
Dutch party on streets as royals prepare for handover
Reuters / Phuket Gazette
PHUKET: Willem-Alexander will become the first King of the Netherlands in more than 120 years when Queen Beatrix passes the crown to her eldest son on Tuesday morning.

“He’s ready, in every way,” Queen Beatrix said of her 46-year-old son, a water management specialist who is expected to bring a less formal touch to the monarchy, as she bid farewell to the nation in a subdued televised address on Monday night.

April 30, or Queen’s day, is always a day for partying in the Netherlands, although many Dutch took Monday off work and started celebrating in earnest from Monday evening with street bands and music.

But this year the city of Amsterdam is putting on a special show to celebrate the investiture of Willem-Alexander and the abdication of Beatrix, 75, who wants to retire after 33 years in the job.

The royals are broadly popular, with 78 percent of Dutch in favour of the monarchy up from 74 percent a year ago, according to an Ipsos poll.

But they have been stripped of their political influence, and no longer appoint the mediator who conducts exploratory talks when forming government coalitions.

Nearly a million people are expected to join the street party with dancing to bands and DJs, helping create a carnival atmosphere. As always, there will be people on the pavements at dawn setting up traditional makeshift bric-a-brac stalls.

Britain’s Prince Charles and Japan’s Crown Princess Masako, who is making her first foreign trip since falling ill a decade ago, will be among 2,000 visitors at the official ceremony.

“There will be tears on Tuesday,” said Dutch Prime Minister Mark Rutte, paying tribute to “this formidable lady who has ruled this country for over 30 years”.

All three will appear on the palace balcony to wave and address the crowds in Dam Square.

They will then head from the palace to the 600-year-old Nieuwe Kerk, or New Church, next door where the king will swear an oath to uphold the Dutch constitution before lawmakers.

The Dutch monarch is never crowned, since, in the absence of a state church, there is no cleric available to carry out the coronation. But there is a crown, which will sit on a table next to him throughout the ceremony, along with other regalia that constitute the crown jewels.

Willem-Alexander will wear a royal mantle that has been used for investitures since 1815, although it has been repaired and altered at least twice over the past century, for the investitures of his mother and grandmother.

The celebration will continue through the evening with a water pageant along the Ij, Amsterdam’s historic waterfront.

Students said the incident on Monday was a sign of neglect by officials at Al-Azhar, a thousand-year-old mosque and university in Cairo that draws students from across the Sunni world.

An initial investigation of the first food poisoning incident by the toxicology unit of Ain Shams hospital in Cairo blamed contaminated food.

“Those of you who are silent about this, why are you silent?” the students chanted on Monday. They blocked a road in front of university in the Cairo neighbourhood of Nasr City.

Protests on issues ranging from national politics to local grievances have become more common in Egypt since the overthrow two years ago of autocratic president Hosni Mubarak.

Ibrahim El-Hodhod, the deputy-president for educational and student affairs at Al-Azhar, said a committee had been formed to investigate the incident, state news agency MENA reported. El-Hodhod visited the hospitalised students on Monday, MENA said.

An emergency meeting by the university’s management would be held on Tuesday to look into the case, MENA said.

Egyptian Prime Minister Hisham Kandil visited the hospitalized students on Monday and ordered the interior ministry to immediately investigate the mass food poisoning, according to a statement from his office on Monday evening.


Russian law on NGOs comes under fire at U.N. rights forum
Reuters / Phuket Gazette
PHUKET: Russia’s new law on non-governmental organisations (NGOs) came under fire at the United Nations on Monday from Western critics led by the United States calling for it to be rescinded.

Western powers and rights groups view the restrictive legislation and inspections as being aimed at intimidating activists and silencing criticism of President Vladimir Putin.

But the Kremlin says that law requiring NGOs with funding from abroad to register as “foreign agents” is needed to ensure transparency and the justice minister defended it during a debate on Russia’s record at the U.N. Human Rights Council.

The Geneva forum examines the policies and practices of all U.N. member states every four years. The open debate and its non-binding recommendations are designed to train a spotlight on abuses and pressure governments to make democratic reforms.

“We’re concerned by laws which restrict civil society, including human rights activists, which have been used to justify the wave of unannounced inspections of civil society organisations,” U.S. Ambassador Eileen Chamberlain Donahoe said.

Arbitrary arrests and “prosecutions of peaceful protesters and opposition leaders” were also of concern, she added.

Britain and Germany were among countries to speak out at the law on NGOs that engage in political activity, which came into force in November, but stopped short of demanding its removal.