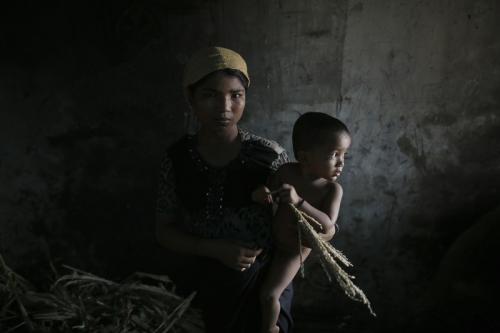 
Muslim victims of Myanmar unrest face uncertain future
Reuters / Phuket Gazette
PHUKET: In Myanmar’s central heartlands, justice and security is elusive for thousands of Muslims who lost their homes in a deadly rampage by Buddhist mobs in March.

Many are detained in prison-like camps, unable to return to neighbourhoods and businesses razed in four days of violence in Meikhtila that killed at least 43 people, most of them Muslims, displaced nearly 13,000, and touched off a wave of anti-Muslim unrest fuelled by radical Buddhist monks.

“It’s for their own security,” said a police officer at a camp inside a sports stadium on Meikhtila’s outskirts. The camp holds more than 1,600 people guarded by police with orders not to let them leave, said the officer, who declined to give his name.

A dawn-to-dusk curfew has been in force in Meikhtila since the government declared martial law on March 22. Skeletal walls and piles of rubble are all that remain of Muslim homes and businesses that once covered several blocks at the heart of the town of 100,000 people in the centre of Myanmar.

Trials have begun, but so far only Muslims stand accused, raising fears that courts will further aggravate religious tension by ignoring the Buddhist ringleaders of the violence.

The unrest and the combustible sectarian relations behind it are one of the biggest tests of Myanmar’s reform-minded government, which took power in March 2011 after almost half a century of hardline military rule.

Myanmar is a predominantly Buddhist country, but about 5 percent of its 60 million people are Muslim. They face a growing campaign of anti-Islamic sentiment led by radical Buddhist monks.

An independent commission released a report on Monday saying Myanmar must urgently address the plight of Muslims displaced by sectarian bloodshed in western Rakhine State. It came in response to violence last June and October that killed at least 192 people and left 140,000 homeless, mostly stateless Rohingya Muslims in an area dominated by ethnic Rakhine Buddhists.

The trial of seven Muslim men accused of murdering a monk, believed to be the first killing in the March unrest in Meikhtila, is expected to conclude this week. Those on trial say they are innocent.

The sound of hammers ring across the city as workers dismantle what is left of the Muslim neighbourhood, stone by stone. There are no signs of Muslims on the streets.

More than 8,000 Muslims are being held in seven official camps that are off-limits to journalists. Thousands more have crowded into unofficial camps in villages near Meikhtila, where police also restrict their movements and prevented them from speaking with Reuters.

“Locking people up in an IDP camp is not a substitute for providing basic security and ensuring communal peace,” he said. “Even if the authorities’ intent is good, they are clearly going about this the wrong way.”

Spokesmen for the president’s office did not respond to requests for comment.

One of the office’s spokesmen, Ye Htut, has previously stressed that the monks involved in the Meikhtila violence make up only a fraction of the 500,000-strong monkhood. “All perpetrators of violence will be prosecuted to the fullest extent of the law,” said President Thein Sein in a nationally televised speech on March 28.

The government has promised to help Muslims rebuild their homes, but reconstruction has yet to begin. Building more than 1,500 houses burned down or damaged would cost $7 million, it said.

“I can’t accept living with them again, because they insulted Buddhism and a monk’s blood was spilled on the ground,” said Than Htun, as he waited outside a prison to see his son who was arrested for looting money from a Muslim home during the rioting.

Such hostility could influence the outcome of the ongoing murder trial, suggested Thein Than Oo, a lawyer for three of the seven Muslims accused, who believed the judge is under pressure from Buddhists to deliver a guilty verdict.

“He has to satisfy the people,” he said.

He pointed to the case of the Muslim owner of a gold shop, his wife and an employee who on April 11 received 14 years without parole for theft and assault. The charges stemmed from an argument with a Buddhist customer, which sparked the first bout of rioting earlier on the day the monk was killed.

The court imposed harsh sentences due to the violence that erupted afterwards, said Thein Than Oo.

Most victims of the rioting were Muslim but no Buddhists have appeared in court. The district judge said they would be tried after the current trial ends.

Neither the judge nor the district police could say if any monks would be charged. Monks led many of the mobs, according to dozens of witnesses interviewed by Reuters.

New York-based Physicians for Human Rights called for an independent investigation into a report of a massacre at an Islamic school on March 21. The group said 32 students and four teachers were missing.

One student, Soe Min Oo, 18, said he fled with other students and teachers when the school was attacked, taking refuge with other Muslims in a nearby compound.

Soe Min Oo said the mob tossed petrol bombs into the compound until police arrived and offered to bring the nearly 200 Muslims to safety. But the few dozen officers could only protect some of them, said Soe Min Oo, pausing frequently to fight back tears.

He said the Buddhist mob hit them and threw stones as they left the compound, and those who came out last were beaten to death. He saw three friends killed.

“I’ve never faced anything like this situation before,” said Soe Min Oo. “I feel very sad.”

Soe Min Oo spoke to Reuters in a tiny Muslim village about half an hour outside Meikhtila where he was staying with family. During the interview, an official who wouldn’t say who he worked for arrived on a motorcycle and demanded names and contact numbers from journalists.

Mandalay chief minister Ye Myint denied a Reuters request to visit official camps in his region, which includes Meikhtila. Immigration and police officers banned access to an unofficial camp in Yindaw, a village about a 45-minute drive from Meikhtila.