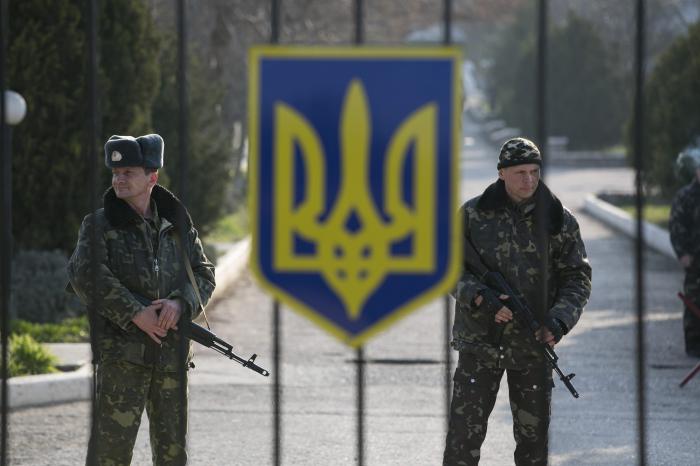 PHUKET: The United States and European Union imposed personal sanctions on Monday on Russian and Crimean officials involved in the seizure of Crimea from Ukraine as Russian President Vladimir Putin signed a decree recognising the region as a sovereign state.

The moves heightened the most serious East-West crisis since the end of the Cold War, following a disputed referendum in the Black Sea peninsula on Sunday in which Crimea’s leaders declared a Soviet-style, 97-percent vote to secede from Ukraine.

Within hours, the Crimean parliament formally asked that Russia “admit the Republic of Crimea as a new subject with the status of a republic”. Putin will on Tuesday address a special joint session of Russia’s State Duma, or parliament, which could take a decision on annexation of the majority ethnic-Russian region.

That would dismember Ukraine, a former Soviet republic once under Moscow’s thumb, against its will. Kiev and the West said the referendum, held under armed Russian occupation, violated Ukraine’s constitution and international law.

Russian forces took control of Crimea in late February following the toppling of Ukrainian President Viktor Yanukovich after deadly clashes between riot police and protesters trying to overturn his decision to spurn a trade and cooperation deal with the EU in favour of cultivating closer ties with Russia.

U.S. President Barack Obama slapped sanctions on 11 Russians and Ukrainians blamed for the seizure, including Yanukovich, and Vladislav Surkov and Sergei Glazyev, two aides to Putin.

Putin himself, suspected in the West of trying to resurrect as much as possible of the former Soviet Union under Russian leadership, was not on the blacklist. A White House spokesman declined to rule out adding him at a later stage.

Amid fears that Russia may move into eastern Ukraine where there is a significant Russian-speaking community, Obama warned that “further provocations” would only increase Moscow’s isolation and exact a greater toll on its economy.

“If Russia continues to interfere in Ukraine, we stand ready to impose further sanctions,” he said.

A senior U.S. official said Obama’s order cleared the way to sanction people associated with the arms industry and targets “the personal wealth of cronies” of the Russian leadership.

In Brussels, the EU’s 28 foreign ministers agreed to subject 21 Russian and Ukrainian officials to visa restrictions and asset freezes for their roles in the events. They included three Russian military commanders in Crimea and districts bordering on Ukraine.

The U.S. list appeared to target higher-profile Russian officials close to Putin, including a deputy Russian prime minister, while the EU went for mid-ranking officials who may have been more directly involved on the ground.

Washington and Brussels said further steps could follow in the coming days if Russia does not back down and formally annexes Crimea.

A senior Obama administration official said there was “concrete evidence” that some ballots in the Crimea referendum arrived in some Crimean cities pre-marked.

Russian Deputy Prime Minister Dmitry Rogozin, who was named on the White House sanctions list, suggested that the measures would not affect those without assets abroad.

Obama said Russian forces must end “incursions” into its ex-Soviet neighbour, while Putin renewed his accusation that the new leadership in Kiev, brought to power by the uprising that toppled his elected Ukrainian ally last month, were failing to protect Russian-speakers from violent Ukrainian nationalists.

Moscow responded to Western pressure for an international “contact group” to mediate in the crisis by proposing a “support group” of states. This would push for recognition of the Crimean referendum and urge a new constitution for rump Ukraine that would require it to uphold political and military neutrality.

While a Western diplomat said some of the Russian ideas may offer scope for negotiation, Ukraine’s interim president ruled out ever accepting the annexation of its territory.

A complete preliminary count of Sunday’s vote showed that 96.77 percent of voters opted to join Russia, the chairman of the regional government commission overseeing the referendum, Mikhail Malyshev, announced on television.

Officials said the turnout was 83 percent. Crimea is home to 2 million people. Members of the ethnic Ukrainian and Muslim Tatar minorities had said they would boycott the poll, held just weeks after Russian forces took control of the peninsula.

Putin’s popularity at home has been boosted by his action on Crimea despite serious risks for a stagnant economy.

Russian shares and the rouble rebounded as investors calculated that Western sanctions would be largely symbolic and would avoid trade or financial measures that would inflict significant economic damage.

However, British Foreign Secretary William Hague said EU countries had begun discussing the need for Europe to reduce its reliance on Russian energy “over many years to come”. Much of that energy is shipped through gas pipelines crossing Ukraine.

Germany, the EU’s biggest economy, gets 40 percent of its gas from Moscow and could become more dependent as it switches from nuclear power.

In a sign of possible internal debates ahead, euro zone newcomer Latvia said the EU should compensate any countries hurt by sanctions against Russia. The three former Soviet Baltic states, home to Russian-speaking minorities and dependent on Russian energy supplies, could suffer in any retaliation.

Moscow defended the takeover of Crimea by citing a right to protect “peaceful citizens”. Ukraine’s interim government has mobilised troops to defend against an invasion of its eastern mainland, where pro-Russian protesters have been involved in deadly clashes in recent days.

The Ukrainian parliament on Monday endorsed a presidential decree for a partial military mobilisation to call up 40,000 reservists to counter Russia’ military actions. Ukraine recalled its ambassador from Moscow for consultations.

U.S. and European officials say military action is unlikely over Crimea, which Soviet rulers handed to Ukraine 60 years ago.

But the risk of a wider incursion, with Putin calculating the West will not respond as he tries to restore Moscow’s hold over its old Soviet empire, leaves NATO wondering how to help Kiev without igniting a wider conflict.

For now, the West’s main tools appear to be escalating economic sanctions and diplomatic isolation.

Highlighting the stakes, journalist Dmitry Kiselyov, who is close to the Kremlin, stood before an image of a mushroom cloud on his weekly TV show to issue a stark warning. He said: “Russia is the only country in the world that is realistically capable of turning the United States into radioactive ash.”

Many Tatars, who make up 12 percent of Crimea’s population, boycotted the vote, fearful of a revival of the persecution they suffered for centuries under Soviet rule from Moscow.

“This is my land. This is the land of my ancestors. Who asked me if I want it or not?” said Shevkaye Assanova, a Tatar in her 40s. “I don’t recognise this at all.”

A pressing concern for