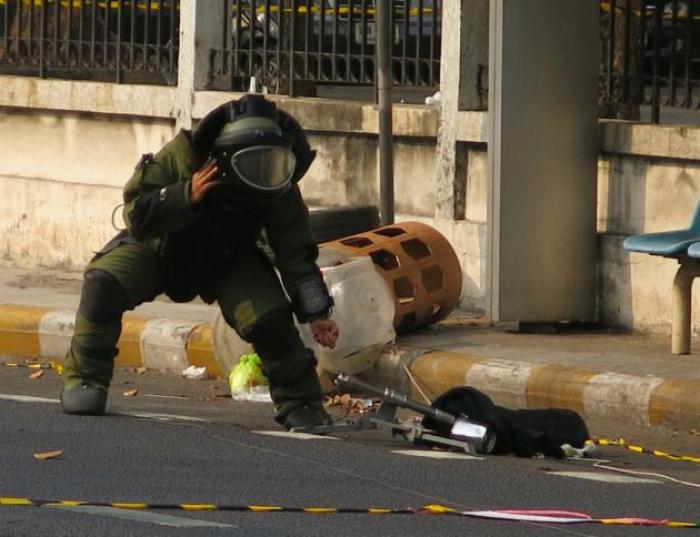 The first one was found at around 7am by a Bangkok Metropolitan Administration street cleaner in a bus stop outside the Office of Public Prosecutors Region 1, while security officials at the Criminal Court found the second one outside the front wall at about 9.30am. The bombs were placed a kilometre apart. Ratchadaphisek Road was closed to traffic while Explosive Ordnance Disposal (EOD) officers defused the bombs.

Police spokesman Pol Maj Gen Anucha Ramayanon said fire extinguishers had been used to build the bombs. They were filled with 15 kilograms of explosives and an alarm clock was attached to each bomb.

EOD chief Pol Colonel Kamthorn Uicharoen said the explosions could have affected a radius of 20-40 metres, adding that investigators believed the same people were behind both bombs, though police had not yet established the motive.

He said the bombs were similar to those found in the restive South.

Although the alarm clock attached to the first bomb was set at 9am, it is still unknown what time the bomb was set to explode, he said.

Metropolitan Police Bureau chief Lt-General Camronwit Toopgrajank has ordered officials to investigate the incident closely to find the wrongdoers, adding that images captured on closed-circuit TV nearby should also be studied carefully.

In a previous incident on February 14, an M79 grenade was fired into a room on the seventh floor of the Criminal Court. On February 23, a grenade was found in the car park of the Civil Court, which is also on Ratchadaphisek Road.

On March 3, a grenade was lobbed over the fence into the Criminal Court’s car park, while another was dropped on the footpath outside.

On Sunday, Kui Buri National Park officials on patrol discovered the headless charred carcass of a gaur near Phraek Haeng Creek. Police also collected two spent bullets at the creek, fingerprints and gaur blood samples as evidence. The Sunday investigation showed that the hunters had apparently shot the gaur while it was drinking at the creek.

Thanet said a gang of poachers had killed the animal, cut off its head and removed the meat before burning the carcass to conceal the crime. He said a gaur head with horns could fetch Bt50,000-Bt80,000.

Meanwhile, Theerapat Prayurasiddhi, who oversees the Department of National Parks, Wildlife and Plant Conservation (DNP), said his office dispatched a veterinarian yesterday to re-examine the carcass before its burial.

Admitting that the area still faced the problem of poaching, Theerapat said the DNP had asked Kui Buri National Park officials to file a complaint with the Pran Buri Police Station for further legal action. The area where the carcass was found is said to be the feeding ground for gaurs and elephants and a special unit called “Khao Kho Laem” has been assigned to guard the area.

Massive fines unless World Cup broadcast free, warns NBTCThe Nation / Phuket GazettePHUKET: RS, Thailand’s broadcasting right holders for this summer’s Fifa World Cup, runs the risk of being fined up to Bt17.3million, should the company fail to allow all 64 matches from Brazil to be shown on free TV, the Office of The National Broadcasting and Telecommunications Commission (NBTC) warned yesterday.

NBTC vice chairman Natee Sukonrat said RS cannot screen World Cup matches through its new set-top box without them being simultaneously broadcast on free TV. He cited a Central Administrative Court decision in November that denied RS’s appeal to exclude the soccer World Cup from the seven sporting events which must be televised by free TV as per NBTC regulations.

“Should RS or other companies advertise that people could watch more World Cup games via its set-top box than free TV, it would be deemed as an infringement. The punishment ranges from an initial fine of Bt5 million plus Bt100,000 each day and the licence of offending party rescinded.

“Since the court has already turned down RS appeal, it means the rules remain in effect until the court rules otherwise. So, we want to warn the company that it cannot have more World Cup games televised on its box,” said Natee.

If RS goes ahead with its plan to give only 22 matches to free TV, it would cost them an estimated Bt8.2 million in fines for the whole period of the tournament between June 12 and July 13. But if authorities penalise the company from the date when the World Cup box goes on sales on April 1, the company would receive additional fines totalling Bt9.1 million, meaning RS would likely be fined Bt17.3 in total.

PHUKET: Thai AirAsia is preparing to work with the AirAsia network regionally to promote Thailand more aggressively to revive a stable flow of foreign tourists into the Kingdom after it was hit by prolonged political turmoil, while in the process meeting its cabin-factor projection of 84 per cent this year.

The Thai unit is working in cooperation with AirAsia’s offices in other jurisdictions including the Philippines and Malaysia, and also its marketing offices in Hong Kong, mainland China, Indonesia and Singapore. Major markets are the primary focus, concentrating on mainland China, Singapore and Hong Kong.

Santisuk Klongchaiya, director of commercial affairs at Thai AirAsia, said the carrier would work even harder in the remaining months of the year to achieve its goal. Regional media outlets will be exploited via campaign promotions and familiarisation trips would be organised, inviting journalists to witness peaceful tourism scenes across the region.

The message to be delivered is that Thailand still has many places to explore, outside the capital city.

Since political tension started late last year in Bangkok and escalated after the government declared a state of emergency, the airline has faced a drop of foreign passengers. Its cabin factor this quarter has declined to 80 per cent, against 84-85 per cent in the first three months of last year.

The number of Chinese passengers has decreased 10-20 per cent year on year. Santisuk said mainland China was the major market on which the campaign would focus with the hope of restoring tourists’ confidence. Singapore and Hong Kong are also targeted because arrivals from those two markets have been hit hard by travel warnings issued by their governments.

However, the state of emergency is still a main enemy of the tourism industry. Santisuk said tha