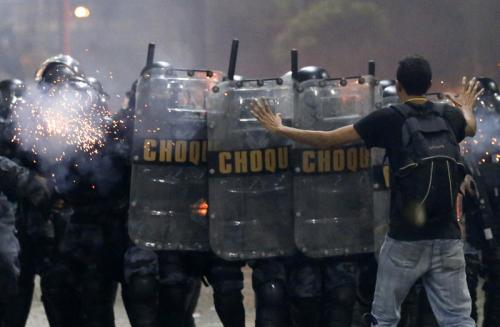 
Brazil hit by largest protests yet
Reuters / Phuket Gazette
PHUKET: Brazil’s biggest protests in two decades intensified on Thursday despite government concessions meant to quell the demonstrations as 300,000 people took to the streets of Rio de Janeiro and hundreds of thousands more flooded other cities.

Undeterred by the reversal of transport fare hikes that sparked the protests, and promises of better public services, demonstrators marched around two international football matches and in locales as diverse as the Amazon capital of Manaus and the prosperous southern city of Florianopolis.

“Twenty cents was just the start,” read signs held by many converging along the Avenida Paulista, the broad avenue in central Sao Paulo, referring to the bus fare reductions. Police there said more than 100,000 people lined the avenue.

While the protests remain mostly non-violent, the growing number of participants made them more tense than previous demonstrations. In the capital, Brasilia, tens of thousands of protesters marched around the landmark modernist buildings that house Congress and the Supreme Court and briefly set fire to the outside of the Foreign Ministry building.

The swelling tide of protests prompted President Dilma Rousseff to cancel a trip next week to Japan, her office said. Local media across the country reported hundreds of minor injuries during the protests, including a television reporter in Rio de Janeiro who recounted being hit by a rubber bullet fired by police.

The targets of the protests, now in their second week, have broadened to include high taxes, inflation, corruption and poor public services ranging from hospitals and schools to roads and police forces.

With an international football tournament as a backdrop, demonstrators are also denouncing the more than $26 billion (16.7 billion pounds) of public money that will be spent on the 2014 World Cup and 2016 Olympics, two events meant to showcase a modern, developed Brazil.

“This is fair play,” read a banner among the hordes in Brasilia, a twist on the slogan used to promote sportsmanship by FIFA, world soccer’s governing body.

After the concession on transport fares on Wednesday, activist groups differed over what their next priority should be. But the competing demands of demonstrators appeared to add to the intensity of Thursday’s protests.

“What am I protesting for?” asked Savina Santos, a 29-year-old civil servant in Sao Paulo. “You should ask what I’m not protesting for! We need political reform, tax reform, an end to corruption, better schools, better transportation. We are not in a position to be hosting the World Cup.”

Inside Rio’s iconic Maracanã stadium, football fans sang protest songs and showed support for the throngs of demonstrators gathering in the city. In Salvador, a northeastern city hosting another game of the football tournament that serves as a World Cup test run, protesters clashed with police, who fired tear gas to disperse crowds.

Police also used tear gas, pepper spray, and other dispersal methods in Rio, Brasilia and other cities. They donned riot gear and used horses, trucks and barricades to help channel the crowds and protect buildings.

The unrest comes six months before an election year. And after nearly a decade-long economic boom in which the country’s profile soared on the global stage, Brazil is entering a period of uncertainty. Economic growth of less than 1 percent last year, annual inflation of 6.5 percent and a loss of appetite for Brazilian assets among international investors have clouded what had been a feel-good era for Brazil.

Brazil’s currency, the real, dropped to a four-year low on Thursday, trading as weak as 2.275 per U.S. dollar. The country’s benchmark stock market index, the Bovespa, also hit a four-year low.

The protests have shaken the once solid ground under Rousseff and her ruling Workers’ Party, a bloc that grew out of convulsive demonstrations by Brazil’s labour movement 30 years ago. Until inflation and other economic woes began eroding her poll numbers in recent weeks, Rousseff enjoyed some of the highest approval ratings of any elected leader worldwide.

The demonstrations have been comprised of mostly middle-class, well-educated voters who do not form the bulk of Rousseff’s electoral base. The president and her party have sought to get ahead of the complaints and embrace them as their own – a shift that contrasts sharply with a playbook that long relied on telling Brazilians that they had never had it so good.

With little more than a year to go before presidential and gubernatorial elections, the unrest is forcing incumbents and traditional political parties to reconsider their strategies.

“We have made everything ready at our end now we only have to wait for confirmation from the (Icelandic) Interior Ministry,” Olafur Vignir Sigurvinsson told Reuters. He is a director of DataCell, a company which processed payments for WikiLeaks.

“A private jet is in place in China and we could fly Snowden over tomorrow if we get positive reaction from the Interior Ministry. We need to get confirmation of asylum and that he will not be extradited to the U.S. We would most want him to get a citizenship as well,” Sigurvinsson said.

Neither a WikiLeaks spokesman nor the Icelandic government were immediately available for comment.

Snowden, a former employee of contractor Booz Allen Hamilton who worked in an NSA facility in Hawaii, made world headlines this month after providing details of the programmes to the Guardian and Washington Post and fleeing to Hong Kong.

Earlier this week, WikiLeaks spokesman Kristinn Hrafnsson said a middleman had approached him on behalf of Snowden to seek asylum in Iceland.

The Icelandic government, which has declined to say whether they would grant asylum to Snowden, confirmed it had received the message from Hrafnsson.

Birgitta Jonsdottir, a lawmaker for the Pirate Party in Iceland which campaigns for Internet freedom, said the only way for Snowden to travel to the Nordic country would be to have Icelandic citizenship.

Snowden has mentioned Iceland as a possible refuge.

Iceland has a reputation for promoting Internet freedoms, but Snowden has said he did not travel there immediately from the United States because he feared the country of 320,000 could be pressured by Washington.

WikiLeaks founder Julian Assange, holed up in the Ecuadorian embassy in London to avoid extradition to Sweden for questioning over allegations of sex offences, visited Iceland several times in the run-up to some of the website’s major releases. Assange denies any wrongdoing.

WikiLeaks and DataCell won a ruling this year in Iceland’s Supreme Court against MasterCard’s local partner.

The court upheld a lower court’s ruling that the payment card company had illegally ended its contract with the website. WikiLeaks’ fundin