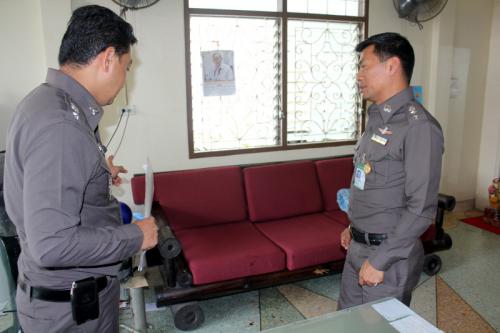 PHUKET: Police are hunting for a man who robbed a motorcycle refinance shop in Phuket Town yesterday morning and shot one of the employees in the leg.

“Before the robbery, three of us were checking a customer list,” said Somruedee Sriwichai, 26, who works at the money lenders on Kra Road (map here).

“We saw a man park his bike opposite the shop, cross the road and come in. He walked toward us, took out his gun and said, ‘Give me the money or I will shoot you,'” she said.

The man walked over to the shop owner, Phanthika Wongkakla, 38, and took 13,000 baht from her drawer.

When Ms Phanthika tried to stop him, he shot her in the leg, then walked back to his motorbike and rode off in the direction of the Korjan Bridge [to Phun Pol Road], she said.

Police were called to the office, where motorcycle owners strapped for cash can use their motorcycle registration books as collateral for loans, at 11:30am.

“When we arrived, we saw blood stains on a sofa and on the floor. We also found a bullet casing from a revolver on the floor,” said Maj Sakol Krainara of Phuket City Police.

“There were two employees in the shop. They told us that Ms Phanthika had been shot in the leg and taken to Vachira Phuket Hospital,” he said.

“The thief is about 30 years old, 165-170 cm tall with dark skin. He was wearing a gray long sleeve shirt, dark pants, a motorcycle helmet and his nose and mouth were covered with a dark mask.

“We are continuing to search for him,” Maj Sakol added.