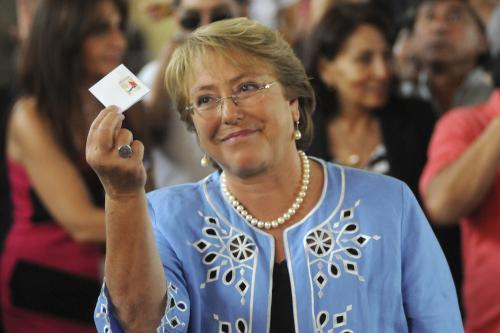 
Bachelet wins Chile election in a landslide, plans reforms
Reuters / Phuket Gazette
PHUKET: Michelle Bachelet was elected as Chile’s president again on Sunday in a landslide victory that hands the centre-leftist the mandate she sought to push ahead with wide-reaching reforms.

Bachelet won with about 62 percent support, the highest proportion of votes any presidential candidate has obtained since Chile returned to holding democratic elections in 1989.

Evelyn Matthei, the conservative candidate of the ruling Alianza coalition, conceded defeat after capturing just 38 percent of the vote, the right’s worst performance in two decades.

Bachelet, who led Chile between 2006 and 2010 as its first female leader, will look to capitalize on her resounding win to make changes aimed at redressing persistent inequality in the world’s top copper exporter.

“Today we embark on a new era … Chile has decided it is the moment to begin deep transformation,” she told crowds of cheering supporters waving flags and sounding horns outside the La Moneda presidential palace as dusk fell on a warm summer evening.

A physician by training, Bachelet is a moderate socialist and has promised 50 reforms in her first 100 days, once she takes office in March.

Her flagship policy is a hike in corporate taxes to 25 percent from 20 percent, to pay for social reforms that include a gradual move to free higher education.

Yet she is a long way from the hard-left radicalism that has shaped Venezuela and Argentina in recent years, and is closer to the pragmatic, business-friendly stance of Brazil’s President Dilma Rousseff.

Bachelet has committed to stick to the path of fiscal prudence that has characterized the economy of the Andean country in recent decades.

“There are two things we know that don’t change in Chile,” said political scientist Patricio Navia. “One is that we always have earthquakes. And the other is that since 1990 governments are fiscally responsible. That goes without question.”

Relief, but not a surprise

Bachelet’s large margin of victory will come as a relief to her, if not a surprise.

Loved by many Chileans for her warm and personable style, her approval ratings were sky-high at the end of her first term. Constitutionally barred from seeking immediate re-election in 2009, she was the runaway favourite to win this year’s vote since before she even launched her candidacy.

But it has not all been plain sailing. Her campaign suffered a setback last month, when the presence of eight other candidates fractured the first round vote and left her just short of the majority needed to seal the election outright.

Her opponent, Matthei, a brusque former labour minister, was a last-minute choice for Alianza in July and struggled to gain traction against Bachelet.

Hailing from the more conservative branch of the governing coalition, Matthei was tainted in the eyes of many Chileans by her association with the repressive 1973-1990 dictatorship of General Augusto Pinochet. Her father was a general in the ruling junta and she supported Pinochet in a 1988 plebiscite.

Dissatisfaction with President Sebastian Pinera’s government also weighed on Matthei’s campaign. Despite solid economic growth and plaudits for its fiscal responsibility, the government was seen as out of touch and slow to respond to demands for change.

Chile’s free-market economy and copper-fuelled growth have made it a Latin American success story in the last two decades. However, there are still sharp social divisions, illustrated by Sunday’s vote in Santiago’s upscale Las Condes district, where only 24 percent voted for Bachelet.

A single mother who was a victim of torture during Pinochet’s rule, Bachelet is seen as a “people’s candidate”.

“This triumph is a small step towards the changes that are coming to Chile,” said 19-year-old education student Beatriz Jorquera as she joined the crowds outside La Moneda.

Bachelet returned to Chile earlier this year to run for the presidency after a spell heading the United Nations’ gender equality body, U.N. Women.

Politically naive when she was elected eight years ago, she is now a more sophisticated operator and is in a better position to get things done, those close to her say.

Top of her list is reforming education. Good quality schooling is generally only available in Chile to those who can pay, and sometimes violent student protests demanding change have hurt the Pinera administration.

But her power will be constrained by a divided Congress. Despite losing seats in November’s Congressional elections, Alianza still has a large enough majority to block at least electoral and constitutional changes.

There are some indications that they will be willing to bargain, but the price may be watered-down reforms.

The wide majority in Sunday’s vote “will give her momentum going into government,” said political scientist Kenneth Bunker. “But she’s still going to have to negotiate in Congress.”

The president-elect also faces high expectations from those who voted her in, and she is not likely to be given much of a honeymoon once her four-year term starts.

More than 500 people died and 189,000 have been displaced in the capital Bangui alone since mainly Christian militias attacked the city, which is controlled by Muslim former rebels once loyal to Djotodia, on December 5.

The first euro zone country to leave a bailout, Ireland’s exit has been hailed by EU leaders as a sign the worst of the continent’s debt crisis is over. Kenny forecast growth could allow the national debt to be cut by a quarter in seven years.

“Our lives won’t change overnight. But it does send out a powerful signal internationally, that Ireland is fighting back,” Kenny said. “Your patience and resilience have restored our national pride.”

Unemployment has fallen below 13 percent, from a 15.1 percent peak in 2012, and property prices have started to rebound prompting the government to forecast gross d