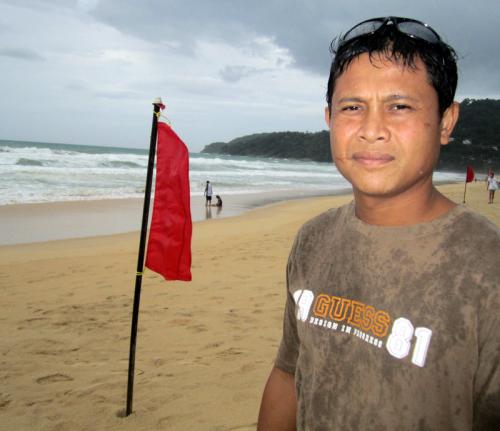 “We have put up signs in many languages warning people about the dangers, but they have not been successful – this is very concerning,” Phuket Governor Maitri Inthusut said in a meeting with Col Weerawat.

Though eight of the 33 people who drowned in Phuket during the one-year period died on Karon Beach, hundreds were safely pulled from the waves, explained Kata-Karon chief lifeguard Uten Singsom.

“Lifeguards saved over a thousand people in the province during that time period,” Mr Uten said.

“In some cases we helped send the victim to the hospital, but, you know, there are a lot of them that were safe and able to go straight back to their hotel,” he said.

The Kata-Karon lifeguard team is responsible for about four kilometers of beach front that comprises Kata Beach and Karon Beach.

“We have six stations, each manned by three lifeguards,” Mr Uten said.

In hope of decreasing the number of drownings this year, Mr Uten explained that lifeguards would be taking special notice of beachgoers who appeared to be over 55 years old.

“At this age, they might be more likely to have health issues that could lead to a drowning or near-drowning situation,” Mr Uten said.

The top lifeguard on Phuket’s deadliest beach urged people to follow three guidelines when enjoying their time in the ocean: don’t drink too much alcohol before swimming; wait about 30 minutes after a meal to get into the water; and pay attention to lifeguards’ warnings.