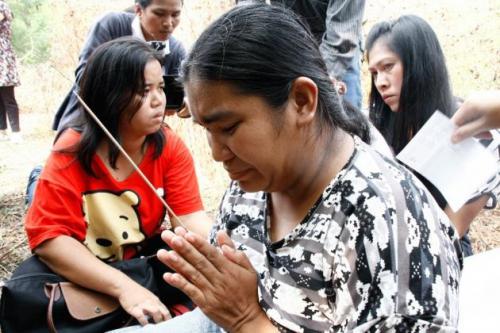 
Man held in killing of girl, 6
The Nation / Phuket Gazette
PHUKET: Police have arrested a man suspected of kidnapping and killing a six-year-old girl.

Footage from security cameras in Bang Na in Bangkok showed the man walking with a girl reported as missing by her parents since December 6.

Bang Na police said yesterday they had received a report from police in Nong Khai that the suspect in the case had been arrested.

“We are on our way to Nong Khai to pick him up. We will bring him back to Bangkok to face justice,” an officer at Bang Na police station said.

On December 6, the girl went to a concert with her father. He said his daughter fell asleep during the performance so he decided to take her to his friend’s vehicle so she could get a proper sleep. He went back to see the concert. When he returned to the vehicle, he found his daughter was gone.

“I am so sorry. I should not have left you in the vehicle,” the father lamented as he broke into tears yesterday.

The father was overwhelmed with grief when police led him to an vacant lot on Sukhumvit 105 (Soi La Salle), where his daughter’s bloodstained T-shirt and a human skull was found.

The girl’s mother fainted at the scene and needed first aid.

“The suspect will face a charge of taking a minor away from her guardians,” Tawatkiat said. “More charges will be pressed against him if DNA test confirms that the skull belongs to the missing girl.”

“We have usually taught our students not to go anywhere with a stranger. We usually tell our students that if any stranger threatens them, they must immediately cry for help or run for help,” the centre’s head Supailee Kongsaengbutr said.


Huge public support for reform: poll
The Nation / Phuket Gazette
PHUKET: Thais overwhelmingly favour reforming the country on many fronts, according to a recent survey by Bangkok Poll.

Of the 631 respondents in all regions, 79 per cent believed the country needs an overhaul and only 21 per cent disagreed.

Political/administrative reform was the first priority for 41 per cent, followed by economic reform at 23 per cent and legal reform at 21 per cent.

Among the desired changes were to protect the sanctity of laws, suppress vote buying, waive the statute of limitations for corruption offences, revamp the police force and make governors elected by their provincial constituents rather than appointed by the government.

Asked who would be the main driver of success, 40 per cent looked to the private sector, 24 per cent to the country’s leaders, 18 per cent to politicians and only 7 per cent to the armed forces. Academics and business were named by 6 and 3 per cent of respondents.


Election must go ahead, says govt forum
The Nation / Phuket Gazette
PHUKET: Suggestions and promises filled a meeting room in the Queen Sirikit National Convention Centre yesterday, where most participants said the best way to solve the political crisis was to hold a general election on February 2 next year.

In the government-hosted forum to find solutions to end the current impasse, politicians, academics and red-shirt leaders also agreed that talks on reforms should continue to ease groups’ differences over the long-term.

Joining the forum were representatives from seven major business organisations, the United Front of Democracy against Dictatorship (UDD or red shirts), the Assembly for the Defence of Democracy (AFDD), academics, permanent secretaries, police and military officers, state enterprise employees, the media, plus political parties and senators.

However, two key groups calling for change – the People’s Democratic Reform Committee (PDRC) and Democrat Party – did not attend this event.

At the forum yesterday, Nikorn Chamnong, an adviser to Chart Thai Pattana, said the party would join the election, as it shared the international conviction that nothing is better than returning power to the people. Yet, the party also saw the need for further talks, to resolve long-standing differences on political ideals.

Caretaker Deputy Prime Minister Phonghtep Thepkanjana expressed disappointment that the PDRC opted out of the forum but said comprehensive reform would take years to complete. However, it would take only two years to set a reform mechanism in place, for a transparent and fair political system and elections.

He agreed with academics’ proposals that politicians ratify the will to reform, before joining the election. Any party winning the poll would have to carry out the reform process. After two years in office, the government would then dissolve the House and call a new election.

Chaturon Chaisang, as a representative of Pheu Thai Party, admitted that the election would partially ease differences. “The crisis stems from not only some groups’ belief that the election will not be transparent, but also their lack of faith in the electoral system and democracy.”

The issue now, he said, was how to ensure that the election was the best way to ease the crisis. At the forum, he urged all politicians to make a vow what they can do in this regard and what they will do after the election.

“Post-election reforms are possible, if all agree to a limited term for the new government. Winning the election, the government would not survive long anyway. However, without ratification from all parties, the problem will not end in light of the issue of advantage and disadvantage.”

PM’s Office secretary-general Tongthong Chandrangsu, who represented the government in hosting yesterday’s forum, said it was agreed at the forum that short- and long-term reforms were necessary and they will deal not only with political issues but also economic issues, corruption, a redistribution of administrative power, and equality.

“No matter what happens in our Kingdom, the reforms must proceed,” he said. Tongthong also welcomed the calls for his office to mediate the formation of a national reform network. Though unsure when the network could kick off, he considered this a good gesture for the country.

Participants at the forum also opposed the PDRC’s push for a “People’s council”, saying this would lead to a bigger crisis including a possible uprising.

Permanent secretary of Defence, General Nipat Thonglek, said military leaders, led by Supreme Commander General Thanasak Patimaprakorn, gave their stance on Saturday – that they back a general election on February 2. “The military are ready to support the Election Commission (EC) to ensure a free and fair election.”.