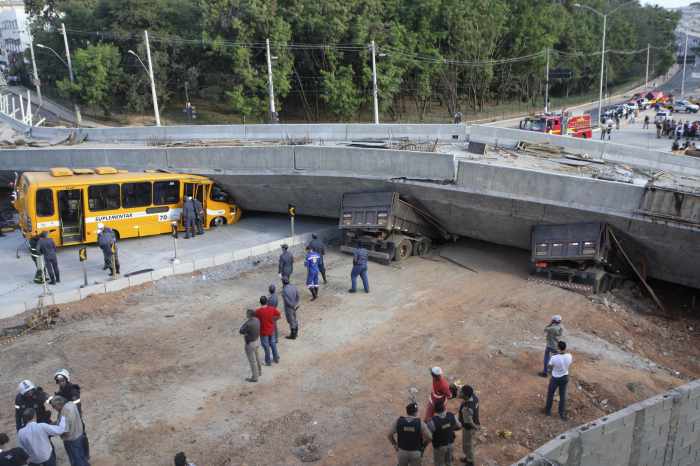 PHUKET: An unfinished overpass collapsed in the Brazilian World Cup host city of Belo Horizonte on Thursday, leaving at least one person dead and casting a shadow over a tournament that has suffered repeated construction accidents and delays.

The bridge, located about two miles (3 km) from the Mineirao Stadium where World Cup games are being played, collapsed as vehicles were passing on a busy road underneath.

Part of a passenger bus was crushed and another car was still trapped in the wreckage hours later.

The collapsed bridge ran over one of the major thoroughfares connecting the stadium area with the international airport. It was part of a Bus Rapid Transit (BRT) system that officials had promised would be ready for the World Cup.Groups of people gathered around the scene of the accident, some shouting furiously.

“This is the incompetence of our authorities and our businesses,” said Leandro Brito, 23, a bank worker. “Because of the World Cup they sped everything up to finish faster. That’s why this tragedy has happened. They are not making things properly. Everyone is very angry.”

Heavy government spending on the World Cup and long delays in infrastructure projects spurred violent street protests across Brazil over the past year, although they have died down in recent weeks and the tournament has gone more smoothly than many fans and government officials expected.

There were conflicting reports over the casualties of the accident in Belo Horizonte, which has already hosted five World Cup games and has the semi-final match on Tuesday.

The city’s fire department confirmed one death and 19 injuries, Lieutenant Colonel Edgard Estevo said. A health department spokesman earlier said two people died, but later said one of the deaths had not yet been confirmed.

Work on the network of bus corridors, financed with more than 1 billion reais (£262.3 million) in federal funds, began in 2010 and was supposed to finish in May.

Downtown portions of the BRT network are running during the World Cup, but long stretches are still under construction.

The cause of the accident, the worst since the month-long tournament began on June 12, was unclear and no workers were known to be on the overpass when it fell.

Rescuers had still not been able to reach one of the cars trapped underneath. “We cannot reach the vehicle; we don’t know how many victims there are and there could still be someone alive,” Estevo said.

GloboNews TV showed video of bloodied passengers of the bus staggering away from the wreckage, screaming.

“We were travelling normally and then there was a terrible noise,” Renata Soares, who said she was on the bus at the moment of the accident, told GloboNews. “I am sure that more people in other cars were underneath the debris.”

Last month a worker died after a 90-tonne beam fell during the construction of a monorail train project in São Paulo.