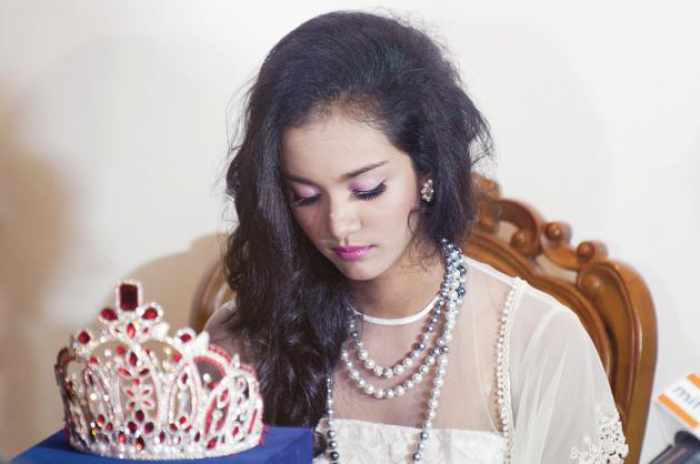 May Myat Noe, 18, was training to become a K-pop star in South Korea after winning the Seoul-based Miss Asia Pacific World beauty pageant in May.

But last week the event organisers stripped her of the title for alleged dishonesty. They accused her of absconding with the pricey crown – and the $10,000 implants, which they say they funded to enhance her budding singing career.

Yesterday the beauty queen hit back and demanded an apology from the organisers.

“It is natural for me to feel that an apology should be demanded to rectify the damage they have done to the integrity of my country,” she told a packed press conference in Yangon. “I will return the crown only when they apologise to Myanmar, for the dignity of our country.”

“I was put under duress to undergo head-to-toe cosmetic surgery which I refused … I didn’t have breast implants, but I don’t want to go into details, to preserve my dignity,” she said.

Event organisers last week accused the teen of being hard to manage, saying her behaviour had left them “very angry”.

“She lied a lot to us about many things. Our past queens also complained – because of her, their reputations will suffer,” event spokesman David Kim told AFP from Seoul.

Myanmar women are eyeing success in international beauty pageants as the country opens up after decades of military rule.

Despite sweeping political and social reforms, Myanmar remains a deeply conservative nation. But new fashions and overseas products are creeping into the once-cloistered nation, supported by a proliferation of magazines for young consumers and an increasingly vibrant pop culture.

Last year a US-educated business graduate was selected as the first Miss Universe contestant to represent Myanmar in more than 50 years.

Much drama has also surrounded the Miss Universe Thailand pageant this year.

In June, Weluree Ditsayabut handed back the crown amid a storm of criticism over political opinions she had voiced on Facebook.

A month later, the pageant’s organiser stripped Sunannika “Nampetch” Kritsanasuwan of her title as second runner-up for after sexy photos of her spread like wildfire.