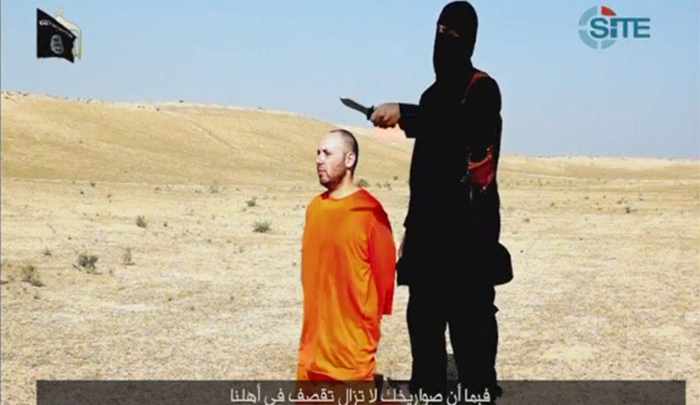 PHUKET: The Islamic State released a video on Tuesday purporting to show the beheading of American hostage Steven Sotloff, raising the stakes in its confrontation with Washington over U.S. air strikes on its insurgents in Iraq.

A masked figure in the video seen by Reuters also issued a threat against a British hostage, a man the group named as David Haines, and warned governments to back off “this evil alliance of America against the Islamic State”.

The purported executioner appeared to be the same British-accented man who appeared in an Aug. 19 video showing the killing of American journalist James Foley, and it showed a similar desert setting. In both videos, the captives wore orange jumpsuits.

“I’m back, Obama, and I’m back because of your arrogant foreign policy towards the Islamic State, because of your insistence on continuing your bombings and in Amerli, Zumar and the Mosul Dam, despite our serious warnings,” the man said, addressing the U.S. president.

In the video, Sotloff describes himself as “paying the price” for the U.S. intervention in Iraq with his life.

Sotloff, a freelance journalist, was kidnapped in Syria in August 2013. Sotloff’s mother Shirley appealed on Aug. 27 in a videotaped message to Islamic State’s self-proclaimed caliph, Abu Bakr al-Baghdadi, for her son’s release.

In the video it released last month, Islamic State said Foley’s death was in retaliation for U.S. air strikes on its insurgents who have overrun wide areas of northern Iraq.

The United States resumed air strikes in Iraq in August for the first time since the end of the U.S. occupation in 2011.

The raids followed major gains by Islamic State, which has declared an Islamic Caliphate in areas it controls in Syria and Iraq.

In Washington, the White House said it could not immediately confirm that Islamic State had released a video of Sotloff’s beheading.

“We have seen a video that purports to be the murder of U.S. citizen Steven Sotloff by the Islamic State of Iraq and the Levant. The intelligence community is working as quickly as possible to determine its authenticity,” National Security Council spokesperson Bernadette Meehan said in a statement.

“If genuine, we are appalled by the brutal murder of an innocent American journalist and we express our deepest condolences to his family and friends. We will provide more information when it is available.”

A source familiar with the matter said that while U.S. officials have yet to formally confirm the validity of the video, it appeared to be authentic.

Iraq’s outgoing foreign minister Hoshiyar Zebari, condemned what he called “this savage killing… an example of savagery and evil,” and said this was evidence of the need for Iraq and the West to defeat the Islamic State.

“We have a common enemy and the whole world is moving in the right direction to stop this savagery and brutality,” Zebari said. “The whole world is standing united against IS. They must be defeated so these horrid scenes will not be repeated.”

Iraqi Shi’ite Muslim politician Sami Askari, who is close to outgoing Prime Minister Nuri al-Maliki, said: “They are trying to scare the Americans not to intervene. I don’t think Washington will be scared and stop … This is evil. Every human being has to fight this phenomenon. Like cancer, there is no cure. You have to fight it.”

British Prime Minister David Cameron condemned Sotloff’s apparent decapitation as “an absolutely disgusting and despicable act (by) barbaric terrorists”. He said he would hold a meeting of his COBRA security crisis team on Wednesday.

French Foreign Minister Laurent Fabius said the killing was a “further illustration of the barbarity without limit of this caliphate of terror that must be fought with the utmost determination”.

A person with ties to the Islamic State in Diyala province said the group had suffered badly in northern Iraq since U.S. air strikes began last month, ahead of the filmed execution of Foley and grisly video of the beheading of a Kurdish soldier.

“The defeat of the Islamic State in the battle of Mosul Dam contributed to a deflating of the morale of its fighters and the American strikes have also succeeded in restricting their field operations,” the man, who spoke on condition of anonymity, said.

“The initiative is not with Islamic State anymore, it’s with their enemy now.”

The United States is taking the Islamic State insurgents far more seriously now than it did six months ago, when Obama told the New Yorker magazine that they were the “JV team,” which is short for “junior varsity” and means they are not the best players on the field.

On Aug. 24, al Qaeda-linked Nusra Front militants in Syria freed an American writer, Peter Theo Curtis, who had been missing since 2012, following what officials said were efforts by the Gulf Arab state of Qatar to secure his release.