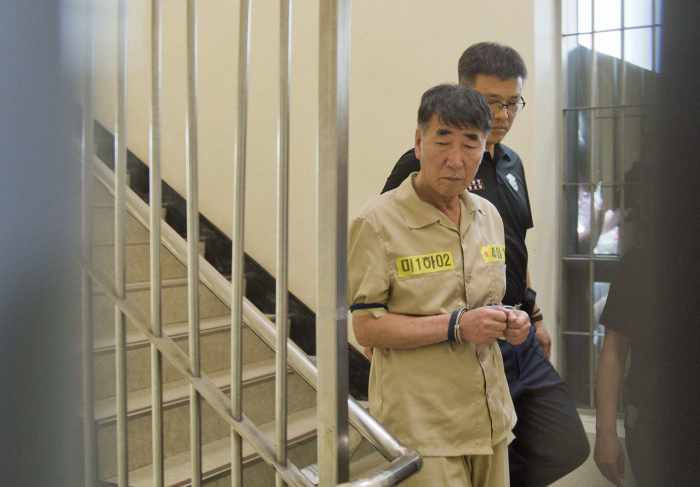 PHUKET: Fifteen crew of a South Korean ferry that sank in April killing more than 300 people, most of them children, went on trial on Tuesday on charges ranging from negligence to homicide, with the shout going up of “murderer” as the captain entered the court.

Emotions ran high in court as family members appeared to have already convicted the crew who were caught on video abandoning ship, the captain in his underwear, while the children, obeying orders, waited in their cabins for further instructions.

As the defendants were led in, someone in the packed courtroom shouted: “That guy is the captain, isn’t he? Murderer!”

One relative held up a sign that read: “You are not human. You are beneath animals.” An altercation broke out between relatives and security guards who tried to take the sign away.

The Sewol, overloaded and travelling too fast on a turn, sank off the southwest coast on April 16 on a routine journey from Incheon on the mainland to the southern holiday island of Jeju.

Of the 476 passengers and crew on board, 339 were children and teachers from the same school on the outskirts of Seoul. Only 172 people were rescued and the remainder are all presumed to have drowned.

Mourning family members packed the court in Gwangju, the closest city to the scene of the disaster, as the 15 were led in and seated on two rows of benches.

The 15 have been in detention since they were charged in May.

A family member spoke on behalf of others at the start of the hearing, imploring the defendants to tell the truth.

The lawyer for the captain, in an opening statement, said his client had no power to stop the ferry company’s practise of overloading the vessel with cargo.

The lawyer, Lee Kwang-jae, also said the captain had not meant to cause the accident, and there were therefore no grounds for the homicide charge.

“It wasn’t like he had a grudge against the children so it’s difficult to accept the prosecution’s argument that he wilfully neglected the duty of rescue and escaped to save himself,” Lee told the court.

The sound of sobbing was heard throughout the courtroom as the state presented its case and the head prosecutor’s voice broke when he recounted the last moments of some of the children.

“I DON’T KNOW WHY THIS IS HAPPENING”

One child was caught on video, recovered later, staring death in the face, the prosecutor said.

“I’m not a criminal, I don’t know why this is happening,” the child was quoted as saying. “I haven’t done anything that bad.”

The court suspended the hearing and set the next court appearance for next Tuesday.

About 20 relatives stood outside the court waiting for the defendants’ bus to appear. Park Eun-hee, the mother of a girl who died on the ferry, denounced the crew’s earlier defence that they had panicked.

“We mothers say this. The crew claimed that they had panic disorder so they didn’t know what to do or couldn’t save the passengers,” she said sobbing. “But during that time, our children were crying as they called their parents and said they were scared.”

A Gwangju judge who handles media affairs, Hahn Jee-hyung, said the defendants were unlikely to get a concerted defence in the highly publicised case.

“They were appointed by the court, so we hope there is no criticism of them,” Hahn told reporters before the hearing. A panel of three judges presided over the first day of the trial, as the state called for justice to be served and the seven defence lawyers presented their case.

The captain and one senior crew member had written to the court pleading leniency, court documents show, but details were not available.

Authorities are still searching for Yoo Byung-un, head of the family that owned the operator of the doomed ferry, on charges of embezzlement seen as a key factor that led to compromised safety management.

Police have arrested executives of the ferry operator and subsidiaries of the investment firm held by Yoo’s family but they have yet to go on trial. The coastguard, which is set to be broken up, is also facing investigation for suspected negligence in the course of the rescue operation.

President Park Geun-hye, who days after the disaster said the actions of some of the crew were tantamount to murder, nominated a former journalist as her choice to be the new prime minister to replace the incumbent who resigned over the government’s slow and ineffective response to the disaster.

Moon Chang-geuk was expected to take charge of overhauling bureaucracy and reforming safety standards as pledged by Park.

A lawyer appearing for the one of the crew in hearings held earlier behind closed doors confessed to being torn between professional obligation and the resignation that lawyers could not make any difference amid a nationwide witch hunt.

“It is a burden for every lawyer, because the crime is something that can hardly be forgiven,” he said in the small coastal town of Mokpo last month.

“It’s not just that one person died. There were hundreds. All I could say to the judges is ‘we will await your wise decision’. That was it.”