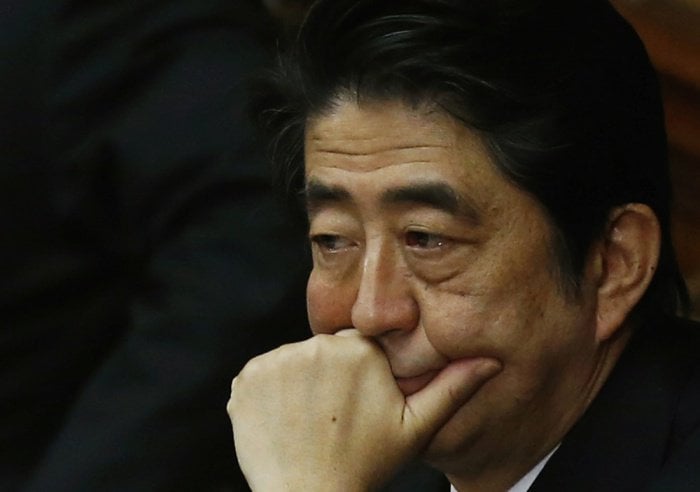 PHUKET: Japanese Prime Minister Shinzo Abe on Wednesday termed “despicable” a new video appearing to show Japanese journalist Kenji Goto, who is being held by Islamic State militants, saying he could be killed in 24 hours.

Abe, in remarks at the start of a meeting of cabinet ministers, also said he felt strong anger over the video, and reiterated that Japan was calling on Jordan to cooperate for Goto’s quick release.

A voice on the video said Goto would be killed unless Jordan frees would-be suicide bomber Sajida al-Rishawi from death row, and that another Islamic State captive, Jordanian pilot Muath al-Kasaesbeh, has a shorter time to live than Goto.

Japan pressed Jordan for help in securing the release of Kenji Goto after a video on Tuesday appeared to show him saying he could be killed in 24 hours.

“Tell the Japanese government to put all their political pressure on Jordan,” said the voice on the video, addressing the Japanese people and saying he will be killed unless Jordan frees would-be suicide bomber Sajida al-Rishawi from death row.

Jordanian state television, quoting an army source, said authorities were trying to authenticate the video. It would be the third involving the 47-year-old Goto, a veteran war reporter.

“The relevant agencies are working on verifying the authenticity of the voice recording that is attributed to Daesh,” the source said, using an acronym for Islamic State.

The hostage issue is the deepest diplomatic crisis Japan’s Prime Minister Shinzo Abe has faced in just over two years in office.

The voice in the video said another Islamic State captive, Jordanian pilot Muath al-Kasaesbeh, has a shorter time to live than Goto. Some media reports have said a swap of Goto and the pilot for al-Rishawi and another militant prisoner held by Jordan was being discussed.

Reuters could not verify the authenticity of the video, but Suga said it appeared to show Goto and the voice resembled that of a video on Saturday that U.S. and Japanese officials have said appeared to be genuine.

Japanese Foreign Minister Fumio Kishida told reporters on Wednesday morning that Tokyo was making every effort in close coordination with Jordan to secure the captives’ early release, but he declined comment on the content of those discussions.

Several hundred people, including relatives of the Jordanian pilot, gathered in front of the office of Jordan’s prime minister late on Tuesday, urging the authorities to meet the demands of Islamic State and release al-Rishawi to save the young pilot’s life.

Safi Kasaesbeh, the father of the pilot, told reporters no official had contacted him after the release of the second video. “I call on all Jordanians to stand as one, calling for the end of Muath’s captivity quickly. They have to meet any demand made by Islamic State,” he said.

Goto went to Syria in late October in order, according to friends and business associates, to seek the release of Haruna Yukawa, his friend and fellow Japanese citizen who was captured in August.

In the first video released last week, a black-clad masked figure with a knife said Goto and Yukawa would be killed within 72 hours if Japan did not pay Islamic State $200 million. The captor resembled a figure from previous Islamic State videos whose British-accented threats have preceded beheadings.

A video on Saturday appeared to show Goto with a picture of a beheaded Yukawa, saying his captors’ demands had switched to the release of al-Rishawi, an Iraqi woman held by Jordan for her role in a 2005 suicide bombing that killed 60 people in Amman.

“Time is now running very short,” the latest video said, with an audio track over a still picture that appears to show Goto holding a picture of the pilot.

He also said further “delays” by Jordan would result in the death of the pilot and then himself.

Kasaesbeh was captured after his jet crashed in northeastern Syria in December during a bombing mission against the militants.

Goto’s mother, Junko Ishido, told Japanese public broadcaster NHK: “I think Japan should do all it possibly can” to secure her son’s release.