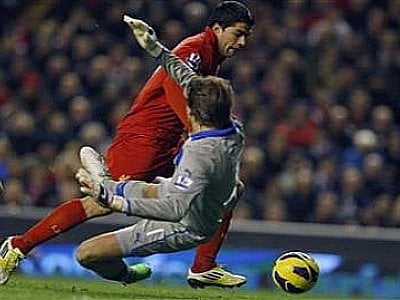 
Suarez goal gives Liverpool draw with Newcastle
Phuket Gazette / Reuters
PHUKET: Liverpool failed to mark captain Steven Gerrard’s 600th appearance for the club with a win when they were held to a 1-1 draw by Newcastle United in the Premier League at Anfield which leaves them mired in mid-table.

Earlier, Queens Park Rangers and Reading drew 1-1 at Loftus Road, leaving the two sides still looking for their first League wins of the season and both in the relegation zone.

Gerrard was presented with a statue of Liverpool’s city emblem, the liver bird, by former skipper Gary McAllister before the match when manager Brendan Rodgers compared him to Superman although not even his astonishing powers could bring victory.

Hatem Ben Arfa created Newcastle’s opener with a superb run down the right before crossing for Cabaye who lashed the ball into the far corner of the net after 43 minutes.

Suarez leveled with an excellent goal when he controlled a long ball from Jose Enrique and rounded keeper Tim Krul to score.

Red Card
Newcastle were then reduced to 10 men when captain Fabricio Coloccini was sent off for a careless lunge at Suarez in the closing stages.

The result left Newcastle in 10th spot, two places above Liverpool whose fans also had to contend with being soaked by a malfunctioning pitch sprinkler which drenched them instead of watering the pitch during the halftime break.

Liverpool have now gone five league matches without defeat – although they have only won one home match all season – and Rodgers told Sky Sports: “Our possession was good and it was fast, but we just could not finish it off.

“That was our fifth draw in 10 (league) games but I am sure we will soon turn that into wins because with that type of football we will always create chances.”

Newcastle manager Alan Pardew was upset that Coloccini was sent off but did not criticize referee Anthony Taylor, saying match officials had enough problems to deal with at the moment.

“He said he thought it was serious foul play. The morale of referees must be really low because of constant criticism and the issues around them are unfair. We accept his decision and I thought he had a good performance.”

Relegation Clash
In the early kickoff yesterday, QPR and Reading shared the points in an early-season relegation scrap at Loftus Road.

QPR manager Mark Hughes has been consistently backed by owner Tony Fernandes but Hughes admitted afterwards, “we need to get maximum points on the board as soon as possible.”

Former QPR defender Kaspars Gorkss put Reading ahead with an acrobatic volley in the 16th minute after the ball rebounded off the bar before Djibril Cisse equalized with a well-taken goal, controlling and firing home from close range after 66 minutes.

Adel Taarabt had a golden opportunity to win it for QPR in the closing stages but Reading keeper Alex McCarthy made a superb block with his feet to steer the ball past the post.

It was his second important save after a brilliant effort stopped Esteban Granero’s freekick in the first half.

The result left Reading in 18th place with five points from nine games and QPR 19th with four from 10.

Southampton, who have a worse goal difference than QPR, also have four points and are now bottom although they have a game in hand at West Bromwich Albion on Monday.

Manchester United moved into first place when they beat visitors Arsenal 2-1 on Saturday when Chelsea, who were top, slipped a place after being held to a 1-1 draw at Swansea City.Ferris)

Ferrari’s Fernando Alonso finished runner-up, just 0.8 seconds behind the Finn after reeling him in with a string of fastest laps, to close the gap with Vettel to 10 points with two races remaining.

On an evening with a huge crash, two safety car interludes and a string of retirements including McLaren’s Lewis Hamilton while leading from pole position, the floodlit Yas Marina circuit hosted one of the sport’s great races and kept the stewards busy.

The victory was Raikkonen’s first since 2009 when the 2007 world champion won in Belgium, the 19th of his career, and made him the eighth different driver to triumph in 18 races so far this season. He stopped just once.

Vettel, who had to start from the pit lane due to a fuel irregularity and finally set the fastest lap of what he called a ‘crazy race’, now has 255 points to Alonso’s 245 and can clinch a third successive title in Austin, Texas, in two weeks if results go his way.

“I went to see Sebastian before the race and he said ‘I’ll see you on the podium’,” said Red Bull team principal Christian Horner of a race in which Vettel’s run of four successive wins come to an end but added considerably to his reputation as a true champion.

“I think it’s one of the best of his career. He really went for it. To go from pit lane to podium is phenomenal.”

Red Bull could have clinched the constructors’ championship for the third year in a row on Sunday but were made to wait after Australian Mark Webber crashed out. They now have 422 points to Ferrari’s 340 with 86 remaining to be won.

Vettel, who had led every lap of the last three races, and Alonso are the only drivers still in contention for the title with Raikkonen third overall but 57 behind Red Bull’s 25-year-old German.

Deadpan Style
Raikkonen, a man who has always done his talking on the track, swigged from his bottle of fizzy non-alcoholic rose water on the podium as the other two sprayed theirs at him.

Asked in front of the crowd by retired McLaren team mate David Coulthard what it was like to win again, the 33-year-old Finn replied in the deadpan fashion his myriad fans have come to love: “Not much really.

“Last time you guys were giving me grief because I didn’t smile enough but I’m happy for the team. It’s been a hard season and not easy times lately,” he added. “Hopefully this will give everyone belief and turn the tables so we can win more races, if not this year then next year.”

Raikkonen, who had signed a contract extension before arriving in Abu Dhabi, had seized second place at the start and inherited the lead after Hamilton slowed and pulled over after 20 of the 55 laps.

When the team advised Raikkonen of the gap between him and his rivals, the Finn was typically blunt: “Leave me alone, I know what to do,” he told his engineer.

“Yes, yes, yes, I do it all the time,” he added later on when they reminded him to warm the tyres.

The win was the first since 1987 by a car racing under the Lotus name, although the new Lotus is effectively the old championship-winning Renault outfit that Alonso took his two titles with.