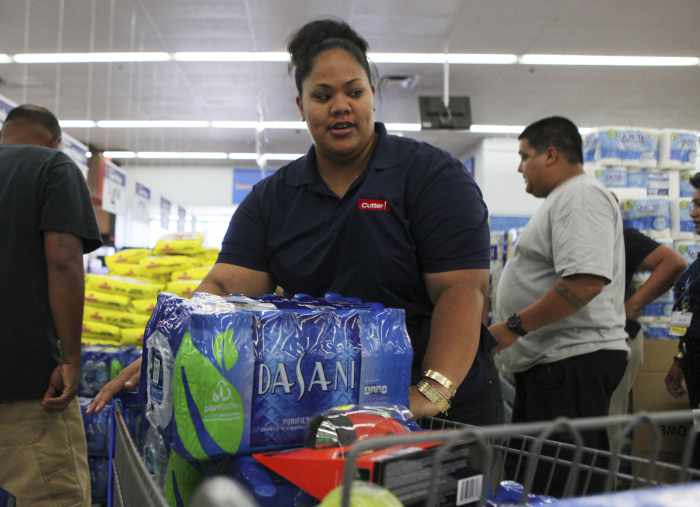 PHUKET: Hurricane Iselle barrelled west across the Pacific Ocean towards the Hawaiian Islands on Wednesday, where officials warned residents and tourists of possible flooding and mudslides and ordered schools closed.

The storm was about 700 miles (1,130 km) east of Hilo, on the Island of Hawaii, at 7 a.m. Hawaiian Standard Time on Wednesday and heading west-northwest at 15 miles per hour (24 km per hour) with maximum sustained winds of 85 mph (137 kph), according to the National Hurricane Centre.

Iselle was expected to weaken into a tropical storm before reaching the islands sometime on Friday morning but forecasters said it could still bring high winds and 10-to-15-foot (three-to-4.5-meter) surf to the tourist haven.

“The Big Island has two peaks of up to 14,000 feet. If the hurricane makes a direct hit over the Big Island, how much of a blocking effect that has we don’t know,” said Ray Tanabe, acting director for the National Weather Service in the pacific region.

Tracking about two days behind Iselle was hurricane Julio, which was upgraded from a tropical storm on Wednesday and could also bring heavy surf and high winds.

Residents stocked up on basics as authorities in Honolulu advised them to prepare a seven-day disaster supply kit. Shoppers waited in lines at supermarkets with carts full of bottled water, batteries and nonperishable food.

“With Hawaii’s remoteness, it could be as long as a week before a full disaster relief operation can be initiated,” the Honolulu Department of Emergency Management said in a statement.

Honolulu school teacher Gina Nakahodo said she had felt calm until she reached the empty water aisle of her local grocery store early on Tuesday.

“We’ve had so many storms that have passed us by, but with these two back to back you begin to worry. Then all of the sudden the aisles are empty and there’s no water and it makes your heart pound a little,” Nakahodo said.

She said she talked to a couple visiting from California and told them everything was going to be OK. “But in the back of my mind I’m wondering, ‘what’s going to happen?’,” she said.

The Coast Guard warned people to prepare for the onset of heavy weather by Thursday, with the two hurricanes expected to generate extreme sea conditions, storm surge and surf of 10 to 15 feet throughout the island chain.

The National Weather Service issued a flash flood watch from early Thursday to early Saturday, with Hurricane Iselle expected to bring heavy rains to the islands.

Public schools would be closed on Thursday on the islands of Maui, Molokai, Lanai and the Big Island, the Hawaii State Department of Education said.

Julio was expected to arrive at the Hawaiian Islands as early as Sunday, but officials said with Iselle on their doorstep, that storm was still their primary focus.