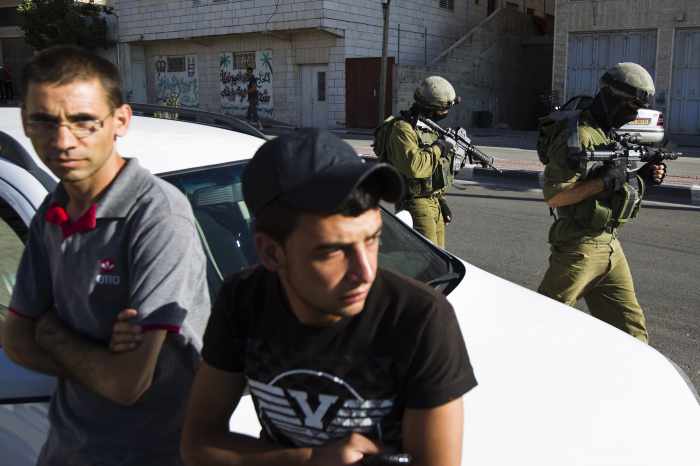 PHUKET: Israeli forces traded gunfire with Palestinians on Thursday, the military said, in the fiercest street battles in the occupied West Bank since a search began for three Israeli teenagers missing for a week.

Hospital officials said three Palestinians suffered bullet wounds in the overnight clashes in Jenin, a militant stronghold and the scene of deadly fighting during a Palestinian uprising a decade ago. There were no reported Israeli casualties.

In a statement, the military said about 300 Palestinians, including some who “hurled explosives and opened fire”, confronted soldiers who entered Jenin looking for the three seminary students.

Israel says the Hamas Islamist group abducted them last Thursday as they were hitchhiking near a Jewish settlement.

“The soldiers responded with live fire, identifying hits,” the statement said, adding that 30 “terror suspects” were detained in West Bank, bringing to 280 the number of Palestinians taken into custody over the past week.

Reuters photographers in Jenin heard heavy gunfire during the night but were kept away from the scene of the clashes by the Israeli army.

Israel has said its West Bank operation is two-fold: to find Gil-Ad Shaer and U.S.-Israeli national Naftali Fraenkel, both aged 16, and Eyal Yifrah, 19, and to deal a substantial blow to Hamas, a group dedicated to its destruction.

Israeli raids have spread from house-to-house searches in Hebron, a flashpoint town in the area where the three went missing, to raids across the West Bank of institutions believed to provide funding and other support for Hamas.

At Bir Zeit University, near the Palestinian town of Ramallah, Israeli soldiers on Thursday seized Hamas posters and flags from a student group affiliated with Hamas.

The military said that so far, soldiers have searched about 900 locations. There has been no word from the missing teens nor any public claim of responsibility or ransom demands – including by Hamas. Hamas however has not issued any denial of involvement.

Western-backed Palestinian President Mahmoud Abbas roundly condemned the kidnappers on Wednesday and promised to hold to account those responsible. His words in turn were denounced by Hamas and other factions, who accused him of betraying the national cause.

On Tuesday, Hamas and 10 other Palestinian factions issued a joint communique warning Israel that they would not “stay handcuffed” in the face of its West Bank dragnet – a threat of armed resistance.

Security experts expect the frustration of ordinary Palestinians at Israeli restrictions in the West Bank to mount as Ramadan is due to begin on June 28-29.