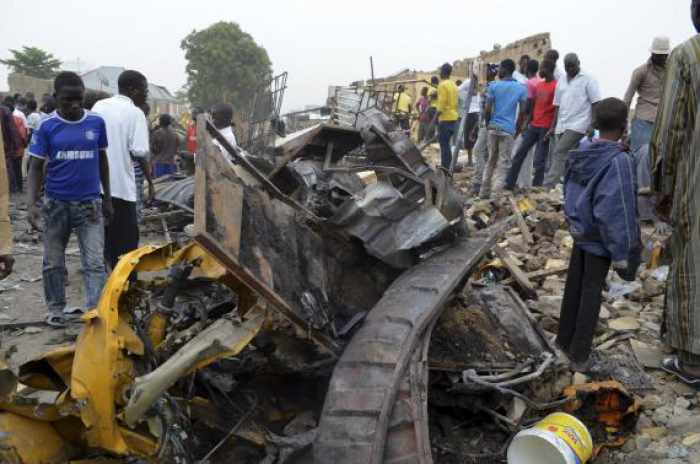 PHUKET: Islamist militants are planning to attack Nigeria’s capital with bombs loaded on petrol lorries, the Nigerian government said, stoking fears of a sustained push to the south from their northern heartland.

Abuja is at pains to show it can crush Boko Haram’s insurgency since the group drew worldwide attention in April by abducting more than 200 girls from a school in the northeast.

On Thursday, the government said – as evidence it was pushing back – that security forces had killed 10 of the group’s members in northeast Borno state, marking a rare recent success.

Without saying how the government planned to counter the attacks, a senior information ministry official, Mike Omeri, said in a statement late on Wednesday that the insurgents were planning to plant “improvised explosive devices in the tankers and drive them to crowded places in Abuja”.

Boko Haram has killed thousands since 2009 and says it wants to create an Islamic state in Nigeria’s mostly Muslim north.

Two bomb blasts in the central capital of Abuja in the south in the weeks running up to the World Economic Forum in the capital in May killed more than 90 people and prompted some delegates to pull out of the conference.

Security forces this week discovered a senior Boko Haram member among a convoy of nearly 500 travellers in the southern state of Abia.

The presence of a high-ranking militant in the mainly Christian south has raised concern that Boko Haram could eventually attempt attacks in the oil-producing Niger delta.

Police in the southern state of Imo, in the eastern part of the delta, defused three bombs found at a Christian church over the weekend. Six people have since been arrested.

Soldiers in Abuja shut down all venues preparing to screen live World Cup matches on Wednesday, hoping to stave off the kind of attacks that have killed more than 20 people in the past two weeks.

The Nigerian government also advised residents of Abuja to avoid public viewing centres as the 2014 World cup kicks off in Brazil in case of attacks.

Militants set off a car bomb that killed 18 people watching a game on television at a centre in the settlement of Gavan, in the northeastern state of Adamawa, on June 1.

A week before, a suicide bomber set out for an open-air screening of a match in Nigeria’s central city of Jos. His car blew up on the way, killing three people.

Such assaults on often-ramshackle television viewing centres across Africa have raised fears militant groups will target supporters gathering to cheer on the global soccer contest.

“Our action is not to stop Nigerians … watching the World Cup. It is to protect their lives,” Brigadier-General Nicholas Rogers said on Wednesday in Yola, the capital of Adamawa state, which has been hit regularly by Boko Haram raids.

Many fans had been relying on the viewing centres – often open-sided structures with televisions set up in shops and side streets – to watch live coverage of their national squad, the “Super Eagles” – seen by many as Africa’s main champion in the contest.

“Apart from installing separate close circuit televisions (CCTVs), they are required to liaise with appropriate security agencies and engage well trained uniformed security personnel who shall be equipped with bomb detectors,” the minister said.

The shutdown in the impoverished regional state bordering Cameroon came a day before the tournament’s opening ceremony and first match between Brazil and Croatia.

But vegetable-seller Mary Toba said she welcomed the decision, especially after the Gavan blast.

“I had told my husband and children they would have to kill me before I let them go out to watch football. I have dreams about the danger … I thank the military for their action,” she told Reuters.

Boko Haram – whose name roughly translates as “Western education is sinful” – has declared war on all signs of what it sees as corrupting Western influence.

Security experts have said the viewing centres’ combination of soccer and, sometimes, alcohol made them a target.

Authorities have issued warnings about going to the venues in Kenya, Nigeria, and in Uganda, where memories are still fresh of bomb attacks on two centres that killed at least 74 people watching the last World Cup final.