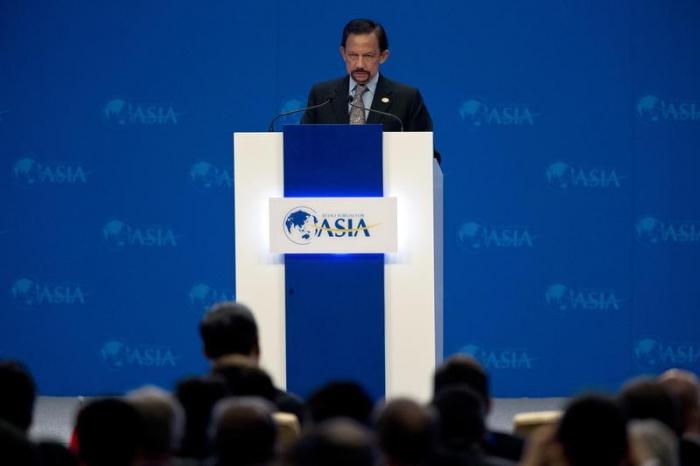 PHUKET: The sultanate of Brunei this week becomes the first East Asian country to introduce Islamic criminal law, the latest example of a deepening religious conservatism that has also taken root in parts of neighbouring Malaysia and Indonesia.

Brunei, a tiny former British protectorate of about 400,000 nestled between two Malaysian states on Borneo island, relies on oil and gas exports for its prosperity, with annual per capita income of nearly $50,000 (29,715 pounds). It is the first country in east Asia to adopt the criminal component of sharia at a national level.

Run by Sultan Haji Hassanal Bolkiah, 67, Brunei has no national elections, but any discontent has been assuaged by high, tax-free incomes and benefits like free education and health care.

By 2035, though, Brunei’s net exports of oil and gas will almost halve, according to the Asian Development Bank. Efforts to diversify the economy have made limited progress.

The sultan, said by diplomats to have become more religious, announced the introduction of sharia as a “great achievement”.

From Wednesday, residents of the country dominated by Malay Muslims face conviction by Islamic courts and fines or jail terms for offences like pregnancy outside marriage, failure to perform Friday prayers, and propagating other religions.

A second phase comes into effect 12 months later covering offences for theft and alcohol consumption by Muslims, punishable by whipping and amputations.

The death penalty, including by stoning, will be introduced in the final phase a year later for offences including adultery, sodomy and insulting the Koran or the Prophet Muhammad.

Most of the laws will also apply to non-Muslims.

That raises concern among Western workers in the oil sector and tens of thousands of ethnic Chinese Bruneians and 30,000 mostly Roman Catholic Filipino migrant workers. About 20 percent of residents are non-Muslim, including substantial Buddhist and Christian communities.

The United Nations Commission on Human Rights denounced the new system for applying the death penalty to a wide range of offences. Several of the penalties constitute torture under international law, said Emerlynne Gil, Southeast Asia legal adviser for the International Commission of Jurists.

“A lot of these provisions and penalties discriminate against women. Stoning to death normally has a huge impact on women because more often than not they are found guilty of these crimes,” Gil told Reuters.

U.S. news reports this week said celebrities, including U.S. television personality Ellen DeGeneres and British actor Stephen Fry, had launched a boycott of a hotel chain owned by the sultan on grounds that the new laws criminalised homosexuality.

Brunei’s religious affairs ministry, which is coordinating the implementation of the new laws, did not respond to Reuters request for comment.

A Christian priest in Brunei contacted by Reuters said he was concerned by the development, but hoped the new system would be enforced less strictly than set down in the written law.

“They have been giving seminars to different groups to clarify,” said the priest, who declined to be identified. Authorities, he said, “seem genuinely concerned” at suggestions that the system would have an all-pervasive enforcement network.

Brunei’s top Islamic scholar denied any suggestion the system would lead to extremes, persecution or cruelty.

“It is not indiscriminate cutting or stoning or caning,” Awang Abdul Aziz was quoted as saying by state media after the law was announced. “There are conditions and there are methods that are just and fair.”

Brunei officials have said there will be a high burden of proof required to sentence suspects to harsher punishments.

Diplomats say it remains unclear how the new system will work in practice and operate alongside the police and courts under the existing British-based legal system.

The religious turn taken by the sultan contrasts with a reputation for decadent excess gained by the royal family.

Late pop idol Michael Jackson was paid a reported $17 million to give a concert in Brunei in 1996 to mark the sultan’s 50th birthday.

Details of the lavish lifestyle of the sultan’s brother, former finance minister Prince Jefri, including owning hundreds of luxury cars and a large yacht – became public during a family legal feud.

Critics say the new penal code will give authorities expanded powers to stifle dissent at a time when palace officials are concerned about dwindling energy reserves.

“A common concern among the palace elite is that the gas is going to run out. The population’s loyalty has been bought with gas money,” said Maung Zarni, a visiting fellow at the London School of Economics who quit the Darussalam Brunei University in 2013 over what he said was a lack of academic freedom.

Responding to a rare outbreak of dissent on social media, the sultan warned in February that anyone criticising the new laws could be punished under their provisions. Strengthening the governing principle of “Malay Islamic Monarchy”, he said, was a crucial “firewall” against globalisation, he said.

Leaders of Malaysia’s Islamist PAS party, part of the opposition, say the move has accelerated their bid to install sharia punishments in Kelantan state, which they control.

A PAS plan to introduce a bill is sowing divisions within the opposition, with critics saying it would be at odds with Malaysia’s secular national constitution.

In Indonesia, some districts have sharia-inspired bylaws but Aceh is the only province allowed to implement it as law. The province has its own sharia police force and courts that enforce strict laws against gambling, promiscuity and alcohol.