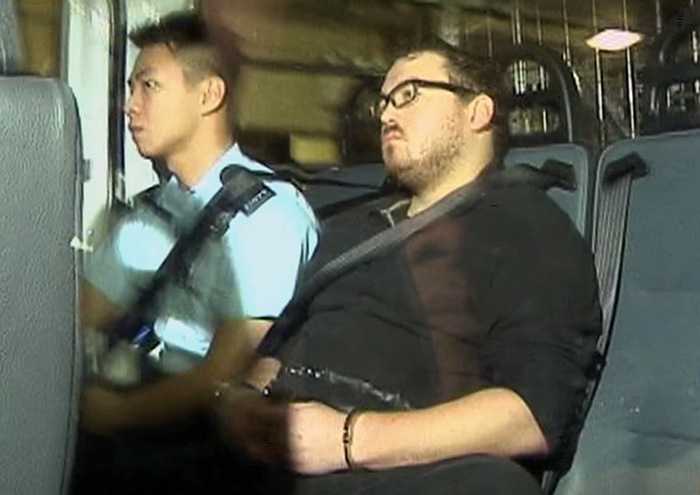 PHUKET:A British banker charged with killing two women in Hong Kong had his securities licences sponsored by Bank of America Corp cancelled around the time the first victim was killed, records with the city’s regulators show.

Rurik Jutting, 29, appeared in court on Monday, when a charge sheet read out against him said one woman was killed on October 27 and the second on November 1.

The killings did not come to public light until November 1 when police found the bodies in Jutting’s apartment. The first victim had been put in a suitcase on his balcony.

The charge sheet identified the woman in the suitcase as Sumarti Ningsih and said she had been killed on October 27. The second woman, who was not identified, was killed on November 1, the document said. It did not say how they were killed.

Local media described the two victims as prostitutes and said both had neck injuries, adding one was nearly decapitated. One of the women was Indonesian, the South China Morning Post newspaper reported.

Bank of America declined to comment on Jutting’s securities licences. The bank has previously said Jutting was an employee until recently but it has not said why he left or given any timeframe.

Jutting held licences sponsored by the US bank from October 7, 2013 through October 28, 2014, according to the website of the Hong Kong Securities and Futures Commission (SFC).

His licences with the Hong Kong Monetary Authority began on November 7, 2013 and ended on October 27, 2014, its website showed.

Such licences are mandatory for any financial professional to operate in Hong Kong.

A LinkedIn account under Jutting’s name said he had worked in structured equity finance and trading at Bank of America in Hong Kong since July 2013. Before that, he had worked in the same department but in London.

Over the weekend, the SFC website had shown that Jutting still had active securities licences. Sharon Lau, an official at the regulator, said changes can take some days to be reflected.

The SFC did not respond to a request for details on when it received the application to cancel Jutting’s licences.

A spokesperson for the monetary authority, Hong Kong’s defacto central bank, said it did not comment on individual cases.

Jutting has been charged with two counts of murder. He did not enter a plea on Monday and did not seek bail. The next hearing is on Monday, November 10.

Jutting could face life in jail if convicted.

Looking stony-faced and unshaven and wearing a black t-shirt and dark-rimmed glasses, Jutting told the court he understood both charges. The brief hearing was adjourned until November 10, without Jutting entering a plea.

Jutting was arrested in the early hours of Saturday at his apartment in Wan Chai, a central city district known for its vibrant nightlife.

Jutting had called police and asked them to investigate the case, police have also said.

Martyn Richmond, Jutting’s duty lawyer, said his client had been denied contact with the British consulate and access to a solicitor of his choice prior to being interviewed.

Jutting had done up to seven police interviews over many hours, Richmond added.

Police declined to comment on Richmond’s accusations. The British consulate did not immediately respond to a request for comment.

A Linkedin account under Jutting’s name said he had worked in structured equity finance and trading at Bank of America in Hong Kong since July 2013. Before that, he had worked in the same department but in London.

The profile also said Jutting had worked in structured capital markets at Barclays between June 2008 and July 2010 and had studied at Cambridge University.

A spokesman for Barclays in Hong Kong said the bank was not immediately able to confirm if Jutting had worked for them.

According to people who were at Cambridge at the same time, Jutting attended Peterhouse, the oldest college, and was president of the Cambridge University History society. He was also a cross-country runner and a rower. Prior to Cambridge he went to Winchester College, one of Britain’s most famous and oldest private schools.

His Facebook account showed pictures of Jutting including one with a young Asian woman. He was wearing a navy and white striped rugby shirt.

Jutting’s most recent posts were on Oct. 31 to articles titled “Money does buy Happiness” and “Is 29 the perfect age.”

The apartment where the bodies were found is on the 31st floor of a building popular with financial professionals, where average rents are about HK$30,000 (nearly 127,000 baht) a month.

“It’s very shocking because we never expected something like this to happen in Hong Kong, especially in the same building that I’m living in,” said banker Mina Liu.

Another woman who lives down the corridor from the flat where the bodies were found said she had seldom seen anyone come and go from the apartment. Residents were woken up in the early hours of Saturday to loud banging and scores of police.

Wan Chai has been a popular haunt for foreign navies on rest and recreation over the decades.

The grisly murders have shocked Hong Kong, a city with a low homicide rate. Such murders are rare in the city of seven million, which had just 14 homicides between January and June, down from 56 in the same period last year, according to government crime statistics.

In one of Hong Kong’s most talked-about killings, the so-called “milkshake murder”, a Merrill Lynch banker was clubbed to death in 2003 by his wife, who drugged him beforehand by serving him a milkshake full of sleeping pills.

US commission urges Obama to meet persecuted Rohingya in Myanmar

British schoolboy jailed for stabbing teacher to death in class