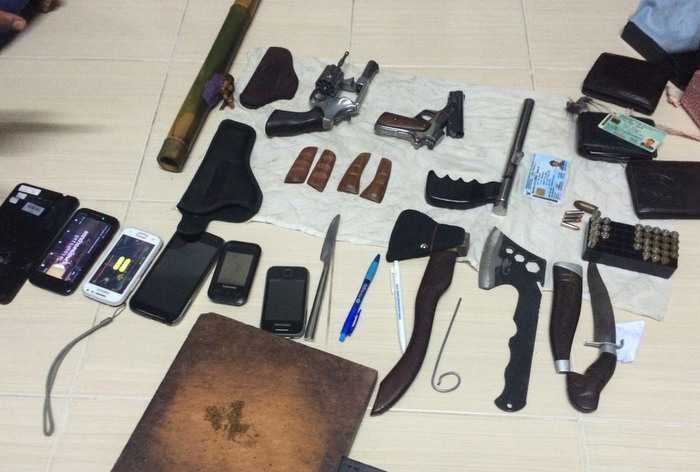 PHUKET: A recent crackdown on drugs and guns in Phuket has resulted in mounting concern over muggings during the Loy Krathong Festival this week.

“There will be a great number of tourists and locals participating in the festivities, and we know that criminals look to take advantage of people during events like this,” Arayaphan Pukbuakao, a deputy commander of Phuket Provincial Police, explained to the Phuket Gazette today.

“We are taking pre-emptive action to get drugs, guns and the criminals who use them off the streets to ensure tourists’ safety.”

As part of the move, four men were arrested in Patong last night in possession of three illegal firearms.

Abhisit Maimard, 25; Akekachai Tohyoa, 28; Anan Wanjae, 26; and Dumree Mama, 24; were caught with the guns when they were busted for smoking marijuana in a rental room.

The men were charged for the illegal possession of firearms and ammunition, as well as possession of a Category 5 drug, confirmed Lt Col Sutthichai Tianpho of the Patong Police.

Also in the Patong area, seven minors were arrested in possession of ya ice (crystal methamphetamine). They were charged with possession of a Category 1 drug.

On Monday, a gang of three men and three minors were arrested in Phuket Town for possession of ya ice. One man was also charged for the possession of illegal firearms and ammunition (story here).

“We are doing our best to sweep the island clean and prevent crime during the festival. Any crime or violence will have a negative effect on the tourism industry, and I don’t want that to happen,” Col Arayapan said.

Phuket looks to “Beach Police’ to serve and protect tourists