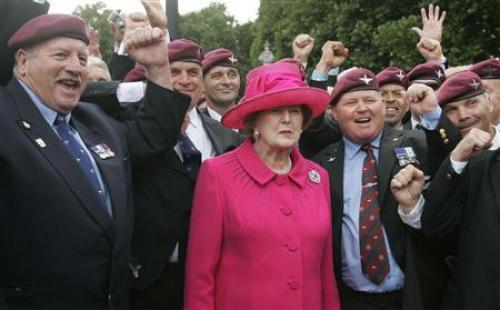 PHUKET: Margaret Thatcher, the “Iron Lady” who dominated British politics for two decades, died today following a stroke, a spokesman for her family said. She was 87.

Britain’s only woman prime minister, the tough, outspoken Thatcher led the Conservatives to three election victories, governing from 1979 to 1990, the longest continuous period in office by a British prime minister since the early 19th century.

“It was with great sadness that I learned of Lady Thatcher’s death,” Prime Minister David Cameron said. “We’ve lost a great leader, a great Prime Minister and a great Briton.”

“It is with great sadness that Mark and Carol Thatcher announced that their mother Baroness Thatcher died peacefully following a stroke this morning,” Bell said.

A grocer’s daughter with a steely resolve, she became loved and loathed in equal measure as she crushed the unions and privatized vast swathes of British industry.

Queen Elizabeth said she was sad to hear the news of Thatcher’s death and sent a message of sympathy to her family.