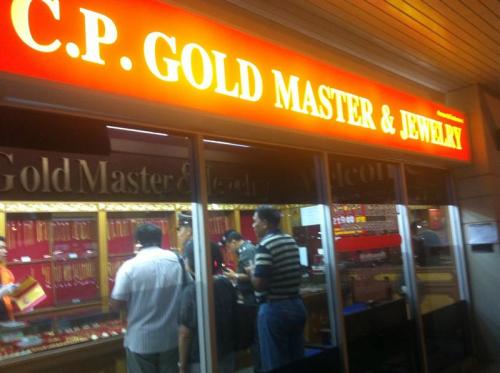 PHUKET: A man was shot dead while trying to stop a hold-up at the C.P. Gold Master & Jewelry store at Tesco Lotus on the bypass road (map here) early this evening.

The robber made off with gold jewelry with a reported value of more than 2.32 million baht,

The shop’s CCTV security cameras show the robber parked his motorbike to the right of the shop’s main door. He entered the store at about 6:10pm wearing a face mask, helmet and carrying a black bag.

One of the counter staff noticed the man entering the store was carrying a gun in his right hand, and alerted the other staff that the man was a robber, eye-witnesses reported.

“The man warned everyone in the shop not to move, otherwise he would shoot,” said one eye-witness. “Then he walked behind the counter and started taking the gold.”

While the robber was stashing the jewelry into the bag, Apichet Choo-kliang, 32, approached the robber to stop him.

The robber shot Mr Apichet in his left chest and he fell to the floor.

After shooting Apichet, the robber continued putting the gold jewelry into the bag.

Satisfied he had what he came for, the robber exited the store and rode off on his motorbike parked outside.

With the robber gone, everyone in the shop rendered assistance to Mr Apichet.

He was rushed to the nearby Phuket International Hospital, but was pronounced dead shortly after arrival.