Phakin’s body was found on Monday in his car parked at a sports stadium in Muang Trang. He’d been missing since December 29.

Police believe robbery was the motive because more than 160,000 baht worth of gold accessories, 80,000 baht in cash and a phone Phakin was carrying were unaccounted for.

Trang police chief Pol Maj General Sompong Thongbai characterised the investigation as half complete, with two of several suspects already in custody and possibly implicating more accomplices. He said autopsy results were awaited from Songklanagarind Hospital, but he believed the actual killer or killers would be arrested later this week. 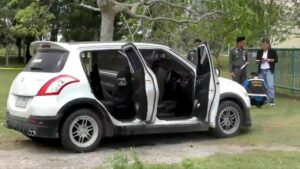 32 year old Phakin, a makeup artist whose salon catered to brides, became the subject of a missing person’s report on December 30, the day after he went missing.

His relatives alerted police and friends appealed on social media for help in finding him, posting photos of his car that led to it being noticed at Thung Chaeng Stadium. The body was found in the rear seat. Police learned that the car was driven into the stadium at around 8.30pm on December 29, in line with the medical examiner’s estimate that Phakin had died three days before he was found. 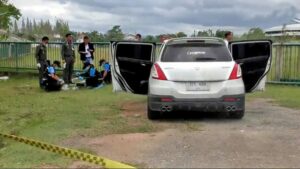 WEDNESDAY NEWS BRIEFING – All your local news in 3 minutes