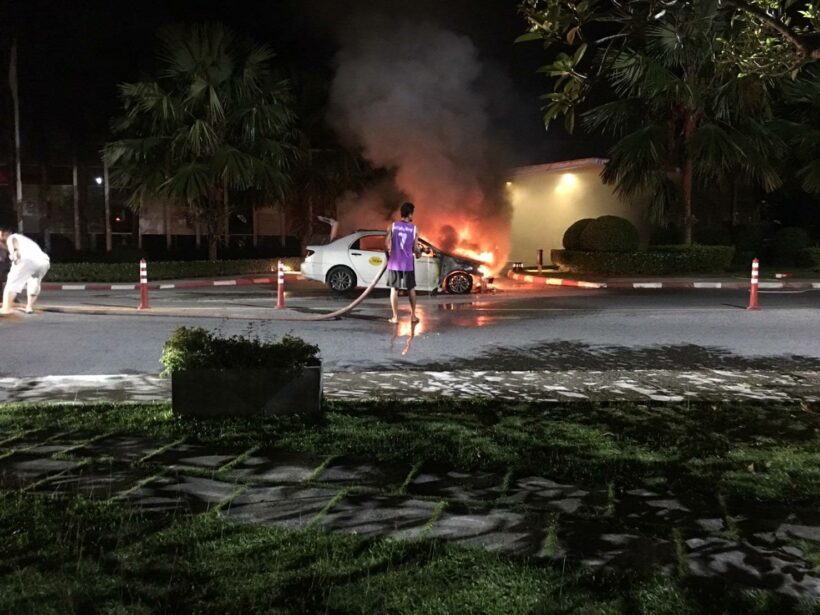 Officials at the Department of Disaster Prevention and Mitigation (DDPM) stationed in Cherng Talay were notified of an incident in front of Cassia Hotel in Laguna, Cherng Talay at 9:05pm last night (May 11).

Fire fighters with two water trucks arrived at the scene along with the Cherng Talay Police.

At the scene they found a burnt white Toyota taxi on the road. The taxi driver, 28 year old Watcharachai Paka, and three members of a Chinese tourist family were waiting 50 metres from the taxi.

It’s took 20 minutes for firefighters to control the fire. The engine compartment and front end were badly damaged. A gas bottle was found installed in the back of the taxi. No injuries were reported.

Mr Watcharachai told police that he was driving from the Phuket International Airport to Angsana Hotel with the three Chinese tourists.

When they were approaching the hotel he smelled something burning. After that they could see fire coming from the engine area at the front of the car. He stopped the car and asked the Chinese tourists to get out of the car with their luggage.

A security man nearby saw the incident, tried to help and put out the fire, but failed. Fire fighters were called immediately and were on the scene within minutes.

At this stage police believed that there was a problem in the plumbing between the gas bottle and the engine that might have started the fire.

Forensic police are now checking the car to find the cause.

The Chinese tourists eventually arrived at Angsana after their unscheduled ‘light show’ on the trip from the airport.