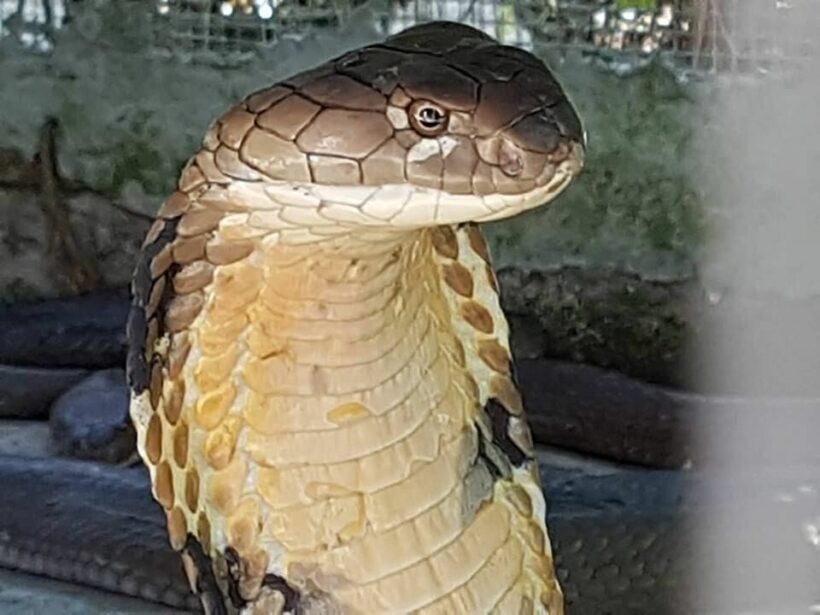 A 3-metre long King Cobra recently slithered into a 55 year old Thai woman’s bed in southeastern Thailand, giving her a not-so-fun surprise. The woman, Janhom Bamrungchai, says she was in the bathroom, when the snake made its move to enter her home and hide in her bed. She was shocked upon finding it and called emergency services to remove the giant snake who seemingly just wanted to “spoon” with her.

When wildlife officials arrived, the woman had booked it outside, leaving the snake to squirm around in her sheets. The team found the snake under her pillow and slowly grabbed the cobra’s head to pull it off the bed. The rescue workers said the cobra was still calm and didn’t try anything before it was captured in a plastic box. The workers said it was a natural instinct for the snake to feel more calm in a small, dark space…..like a pillow or box.

The snake was apparently healthy and the workers say they would hold the snake for a bit before releasing back into the wild, and away from the woman and others. Janhom says she was lucky she saw the snake, otherwise, it could have been lurking under her pillow when she went to sleep. King Cobras can kill a human with their venom, leaving the woman to be in utter shock that she somehow did not get bitten.

A wildlife rescue team member says that locals may see more snakes around as it is mating season. He said the end of the rainy season and the beginning of cold season is when snakes are in the mood. And, it seems the snake got a bit mixed up in his desires when he jumped into a human’s bed. Janhom was definitely lucky that the King Cobra incident did not end in a fatal attraction.

Thailand has had many reported cases of people finding snakes in their homes, and wildlife workers say to keep homes uncluttered as much as possible. In ground floor toilets, spitting cobras have been found inside by those sitting down to use the toilet, often giving a nasty bite on their nether regions, signaling an embarrassing emergency room visit.

ThailandBob
1 hour ago, Dedinbed said: did she egg it on or something Don't tell us she was wearing a skimpy outfit. Always blaming the victim. 😡

gummy
I expect later that the King Cobra will  later be re-identified as the Trouser Snake, no less deadly than a Cobra but known to visit unsuspecting females more often 😂
Saltire
Ran one over on Wednesday, they never look before crossing the road.
HolyCowCm
Article quote: A wildlife rescue team member says that locals may see more snakes around as it is mating season.  That snake has been watching too many old horror films.
DiJoDavO
I thought they put Joe Ferrari in jail.