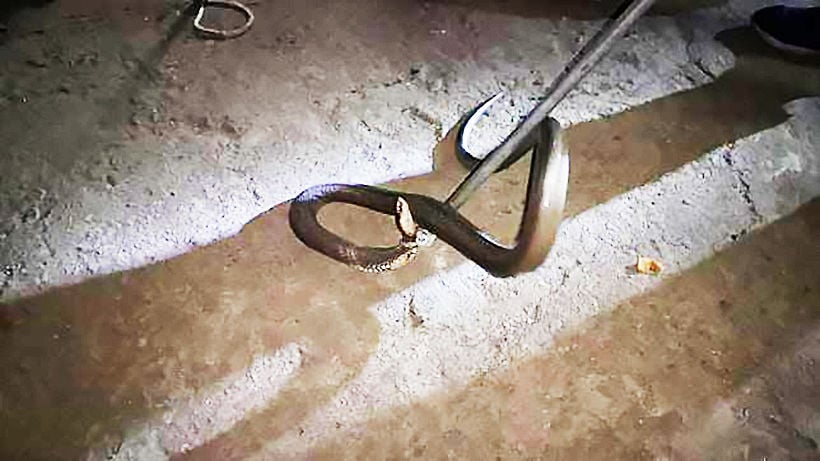 A resident in the eastern Chon Buri province, is reeling after finding a 4 metre long king cobra inside his house in Bor Thong district. Rescue workers were called to scene, arriving to find the large snake hidden under storage boxes inside the home. They say what looked like a professional snake-handling team, helped them to catch the snake after it evaded the rescue workers, venturing outside of the house. 18 year old Junlajak Oermphin told the Associated Thai media he heard strange sounds.

“I was relaxing inside the house alone when I heard some unusual sounds and my pet dog began barking and growling, dashing out of the home through an open door.”

“I stood up from where I had been lying down relaxing and I caught a brief glimpse of the rear of the snake as it slithered under storage boxes, causing me to be alarmed. This was the first time in my life I had seen a snake this size and as I had been home alone I decided to call for assistance from local authorities.”

The Peun Khao Rao Rak Kan rescue team says the cobra will be released back into a local forest. It was just last month that another king cobra was found in Chon Buri by a 12 year old girl. The girl says she was doing laundry in the back of her house when she found the snake in a nearby room.

According to the Pattaya News report, the snake was 2.5 metres in length and it took rescue workers 40 minutes to remove it from the property. Locals say they have never seen a king cobra in the area before. The snakes are more common in the south of the country, not in provinces in the east like Chon Buri, but have also been found frequently around rubber plantations.