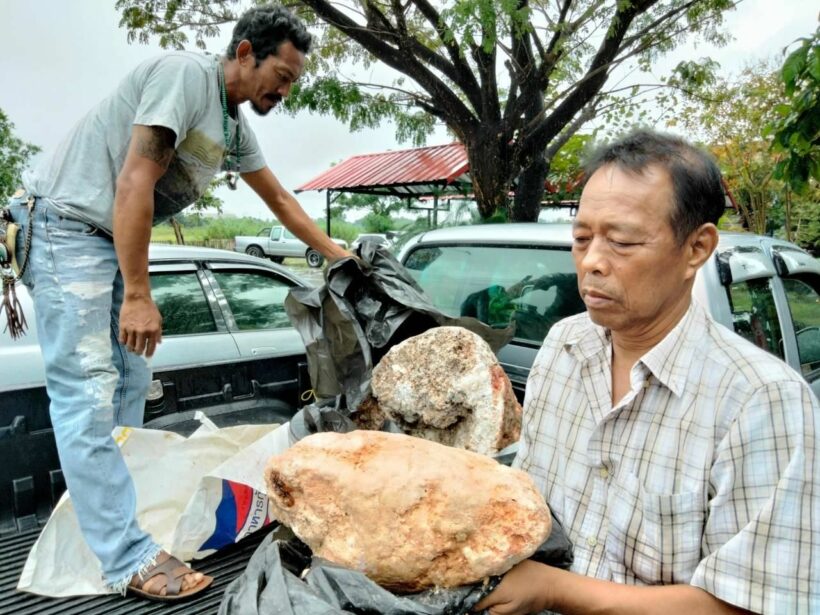 NOTE: Readers with a sensitive stomach are advised not to eat while reading this article.

Floating gold… sounds mystical. Actually, it’s just hardened whale vomit known as the more elegant name “ambergris.” It’s a rare find that can cost thousands of US dollars. Recently, a man in the southern province Nakhon Si Thammarat found what might be the world’s largest chunk of whale vomit estimated to be worth around $4.2 million USD.

Ambergris is a waxy substance formed from a secretion of bile duct in the intestines of sperm whales. While some say it’s whale vomit, some argue that it’s passed like fecal matter.

Why is whale vomit so expensive? Perfume. It’s used as a fixative in perfume to allow the scent to last longer.

60 year old Naris Suwannasang says he came across several pale-coloured rocks while walking on a Nakhon Si Thammarat beach. He took them home and examined them, noticing they resembled ambergris. Naris tested it by burning the surface using a lighter. It melted instantly and gave off a musky smell, a sign that it could be ambergris. If the rock certified Grade A ambergris, Naris is about to become a very, very rich man.

The chunk he found weighs about 100 kilograms. A businessman already offered 960,000 baht per kilogram if the rock turns out to be high quality ambergris. He’s waiting for a specialist to confirm.

“The businessman told me that he will come to check the quality of the ambergris later and the price shocked me… I want to know more about this ambergris and want the specialist to inspect them.”