All claiming to be police officers, 3 men in Southern Thailand tried to extort a man for 5 million baht so he could avoid arrest. Somehow hundreds of villagers in Surat Thani got involved and surrounded the policeman’s Toyota Fortuner, according to Thai media. A video from Thai PBS shows villagers rocking the vehicle back and forth, and the rear window smashed.

Going back a bit, the ‘officers’ confronted the man when he was purchasing 500,000 baht worth of shellfish from local fishermen. The man explained that he was allowed to catch and sell the shellfish, but the officer, who Thai media report as part of the Surat Thani Police Division, still demanded 5 million baht. It’s unclear if the other 2 men were police officers.

When villagers heard about the outrageously high bribe, they formed a riot around the police vehicle. An officer from the Kanchanadit District Police Station got involved, but let the car drive off.

Recently, 6 policemen at the Klong Dan and Bang Phli police stations were accused of extortion and assault. 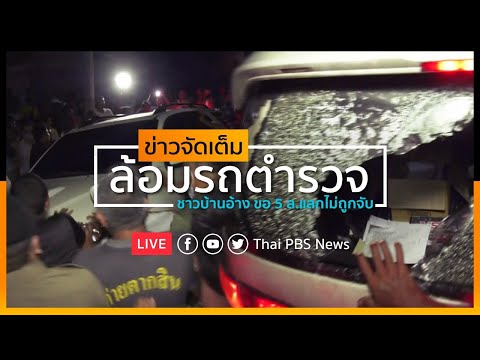