Last month was the first in 16 years in which there were no insurgent attacks on Thai forces or civilians, either in Thailand’s restive Deep South or elsewhere. The country’s three Muslim-majority southernmost provinces of Yala, Pattani, and Narathiwat, all around Malaysia’s northern border, have been embroiled in a bloody separatist insurgency for the best part of two decades.

More than 7,000 people have been killed by violence and many more injured in fighting, which has often seen civilians targetted.

But the coronavirus outbreak has prompted an ad-hoc ceasefire between the Thai government forces and the mainly ethnic Malay separatists. The main militant group operating in the area, Barisan Revolusi Nasional, released a statement Friday saying that the “cessation of all activities” is “to provide humanitarian access to all parties to respond to the Covid-19 epidemic.”

The group says that the ceasefire was to remain as long as the BRN was not attacked by the Thai government, according to documents shared by Human Rights Watch. (NOTE: 3 suspected insurgents were killed in a firefight with Thai forces on Thursday after a raid on their house in Pattani. All three were wanted criminals.)

“We call upon the Royal Thai Government to reciprocate and prioritise Covid-19 prevention over war at this time.” 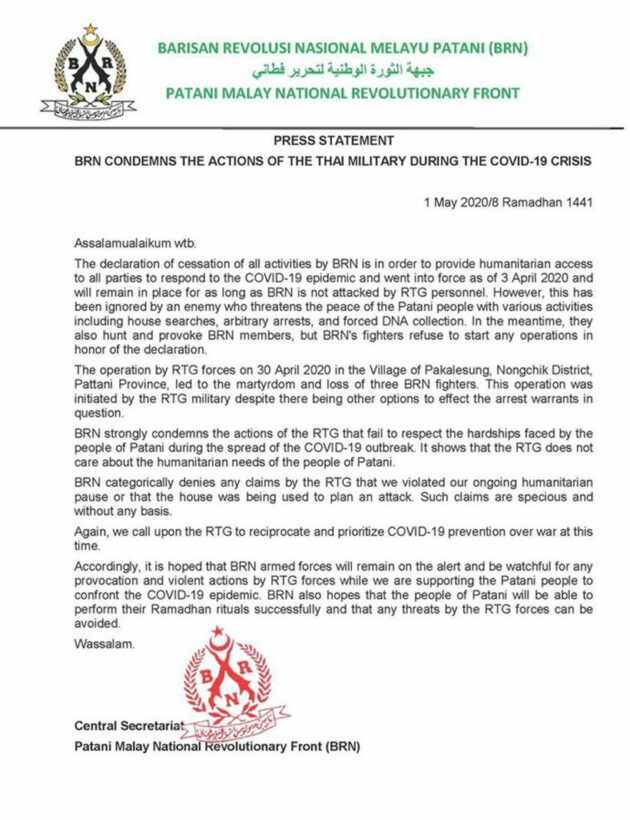 Peace talks between the BRN and the Thai Government have made slow progress in recent months but have been derailed by the coronavirus outbreak. In March, the two sides met in Kuala Lumpur for face-to-face meetings, 6 years after the BRN’s last dialogue with the Thai government. The talks were described as “constructive” and  focused on reducing levels of violence.

Unfortunately, the outbreak of Covid-19 in Thailand has meant the government placing its priorities elsewhere, as lockdown measures were enacted to curtail the virus’ spread.

Sources within the Thai army tell the Thai Enquirer that right now the army and the Ministry of Public Health are focused on containing the virus in the South, which is the site of the largest outbreak outside of Bangkok.

“The insurgency and peace talks can wait until after we have this under control.”