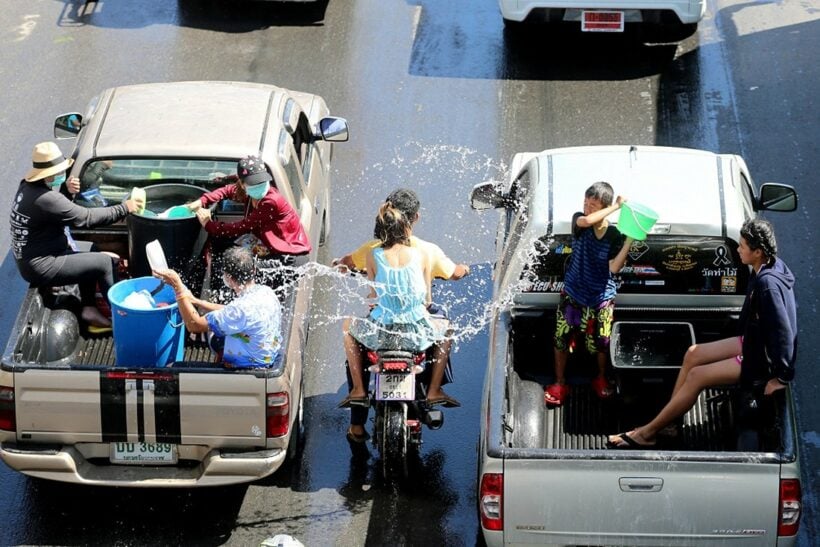 Songkran revellers are welcoming news the government will relax its ban to allow them to splash water from the beds of pickups this year – just one of a number of back-flips on previously announced prohibitions for the 2018 Thai New Year celebrations.

The water festival in mid-April, the hottest month of the year, is known worldwide. One tradition sees people armed with water guns and buckets of water ride in the beds of pickups to splash water on passing vehicles and people.

However, last year the government banned the activity citing safety concerns for passengers at greater risk of injury in accidents. This year, deputy city police commissioner Pol Lt-General Panurat Lakboon said the ban would be relaxed, although drivers of vehicles were told to follow traffic laws.

“This year, the government will allow people to sit in the back of pickups and enjoy the water festival. However, we recommend that drivers of vehicles do not travel over the speed limit to prevent road accidents,” Panurat said.

The relaxation will cover those who would travel back to their home province in the bed of a pickup. Panurat warned that passengers were still banned from drinking alcohol.

“We would like to ask cooperation from women and transvestites to refrain from wearing revealing costumes as this could be against the law and punishable by a fine of 5,000 baht,” he said.

During the festival, which officially runs from April 13 to 15, police will implement special-enforcement areas in nine places around Bangkok. In Phuket there will also be designated Songkran ‘family-friendly’ areas. These will be published next week on The Thaiger.