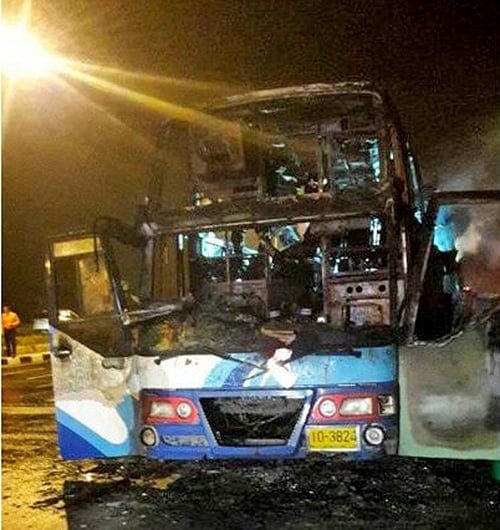 A chartered double-decker bus taking 47 registered Myanmar workers to Pathum Thani caught fire in Tak early today (Friday), killing 20 of them trapped inside. Tak shares a border with Myanmar, north west of Bangkok.
Police report that three other people were injured when they jumped down from the bus while 24 others were able to run out in time and were not injured.
The Thai bus driver, his aide and his wife also escaped uninjured. The Mae Tho police station was alerted of the fire on the highway No 12 in Tambon Mae Tho in Tak’s Muang district at 1 am.
When police and fire fighters arrived, the entire bus was engulfed in the fire, which was put out shortly after. Rescuers found 20 bodies, which were charred beyond recognition, inside the bus.
Police said the 47 Myanmar workers had proper documents and were travelling on the chartered bus from the border checkpoint in Tak’s Mae Sot district heading to the Navanakhon industrial estate in Pathum Thani.
Survivors say the fire started at the middle of the bus and spread quickly, trapping those in the back.
Original story HERE.

Your Say – Closure of Maya Bay during the monsoon 2018