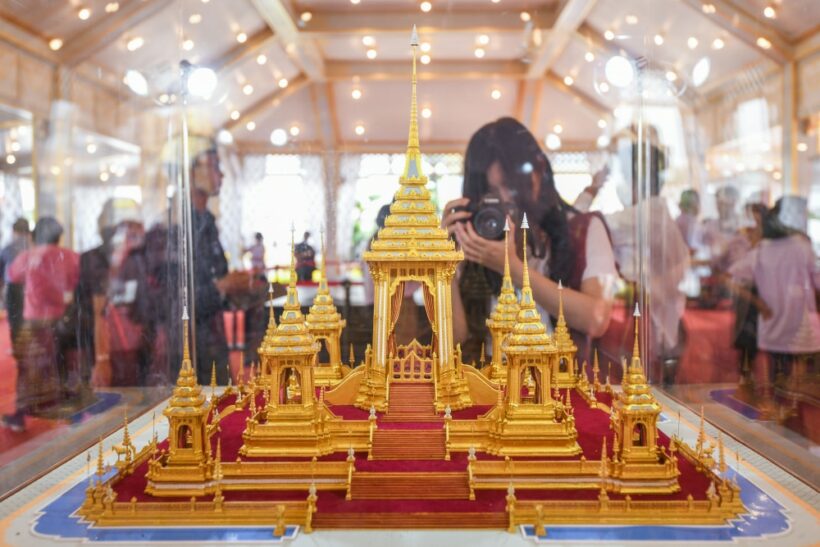 As many as 100,000 people are expected to visit the exhibition each day, with the eight roads adjacent to Sanam Luang remaining closed.

About 5,500 visitors at a time will be led through three areas, first seeing exhibits related to Royal Projects initiated by His Majesty the late King Bhumibol Adulyadej. These include a demonstration rice field, “monkey cheek” water-retention ponds and the Chaipattana water-aeration device he invented.

Other exhibits illustrate aspects of the Royal Funeral.

Visitors, who are required to be formally attired, will then have a chance to take photos in a polite manner with the Royal Cremation as a backdrop. Selfies and live online broadcasts are not allowed.

The highlight of the tour is viewing the ornately decorated interior of the crematorium, which has not been accessible to the general public until now.

“First, we planed for visitors to enter only to the first level of the Royal Crematorium. As we realised all visitors need to see the Royal Crematorium up close, we now allow them to visit the second level,” said Tanasak, who was accompanied by Culture Minister Vira Rojpojchanarat yesterday.

He said the government understood that people were keen to view the interior but urged visitors to keep moving to give others their chance.

The tour ends at the Songtham Pavilion, with its three murals depicting his royal projects and an exhibition of the late monarch at different stages during his 70-year reign. 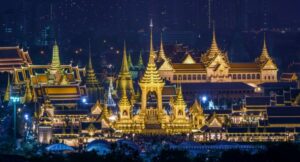 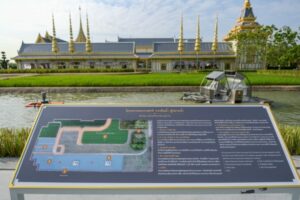 The massive golden-gilded Royal Crematorium, which is as tall as a 60-storey building, is the centrepiece.

“It’s the masterpiece of the world as it shows our rich art and culture,” said 65-year-old monk Phra Wimol Thaichayon from Phra Phradaeng Temple in Samut Prakan.

“It’s a once-in-a-lifetime chance to visit the Royal Crematorium of the late monarch. Being here makes me miss him so much; the King is still in my heart,” said 82-year-old grandmother Urai Wiriyarungrueng, who was in a wheelchair.

The tour includes recorded audio commentary for the hearing impaired and tactile exhibits for the visually impaired, including a replica of the crematorium.

“By touching the replica with explanations by the guide, I can imagine the grandeur of the Royal Crematorium,” said Wiriya Namriripongpun, 65, a retired blind lecturer.

Visitors are required to bring ID cards or passports and will have to proceed through one of five screening points. There are four screening points for ordinary Thai people at the Territorial Defence Command, Tha Chang, the Earth Goddess Statue and Thammasat University, where wheelchairs will be provided, while monks and foreign visitors are invited to check in at the Defence Ministry screening point. 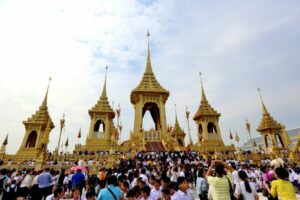 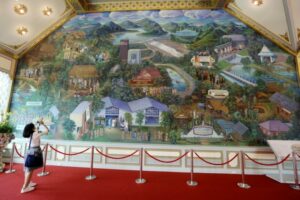 At Saman Luang, tents will be provided for people to wait before entering through one of two entrances. One is near the Earth Goddess Statue while the other is close to Thammasat University.

Visitors will be provided with pamphlets about the Royal Crematorium and, before leaving the exhibition, they will receive postcards coming in nine different versions. Three million each of the pamphlets and postcards will be available, with pamphlets printed in English and Chinese for foreign visitors.

More than 3 million people are expected to visit through November, after which demand would be assessed to determine whether the period should be extended, Tanasak said. If demand remained high, he said, the government would seek His Majesty the King’s permission to extend the timetable.