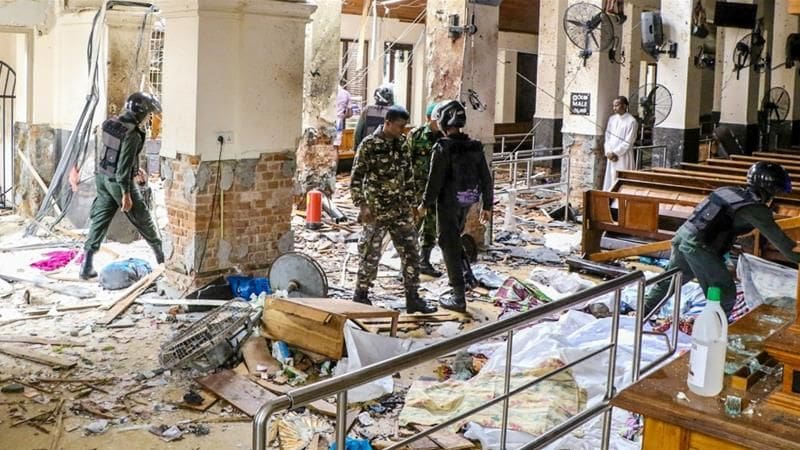 A wave of explosions rocked Sri Lanka up-scale hotels and churches on Easter Sunday around the capital Colombo. This is what we know…

• At least 215 people have been confirmed dead with up to 450 more injured in a series of bombings targeting churches holding Easter services and hotels in Sri Lanka. The toll is likely to rise during today or at least become more precise as officials tally information from emergency responders.

• Most of the dead are said to be Sri Lankans, but officials say up to 40 foreigners have lost their lives.

• Three UK nationals and two US-UK dual nationals were among the dead. One Dutch, one Chinese, one Portuguese and two Turkish nationals have been killed, their respective foreign ministries have confirmed.

• There were six initial blasts, at three hotels and three churches, before two more explosions some time later, at a guest house and housing scheme, with two people reported to have been killed at the former. A government minister says the last two blasts appeared to have been carried out by the culprits as they fled from police.

• No one has claimed responsibility for the attacks but Sri Lanka’s defence minister Ruwan Wijewardene claims the culprits have been identified and were religious extremists. He said suicide bombers were responsible for the majority of the morning’s bombings and that the wave of attacks was the work of a single group.

• Eight people are reported to have been arrested so far.

• The Sri Lankan government has issued a curfew and shut down social media and messaging services to prevent the spread of disinformation.

• The archbishop of Colombo, Cardinal Malcolm Ranjith, called it “a very sad day” and is urging the government to identify the attackers and “punish them mercilessly because only animals can behave like that”.