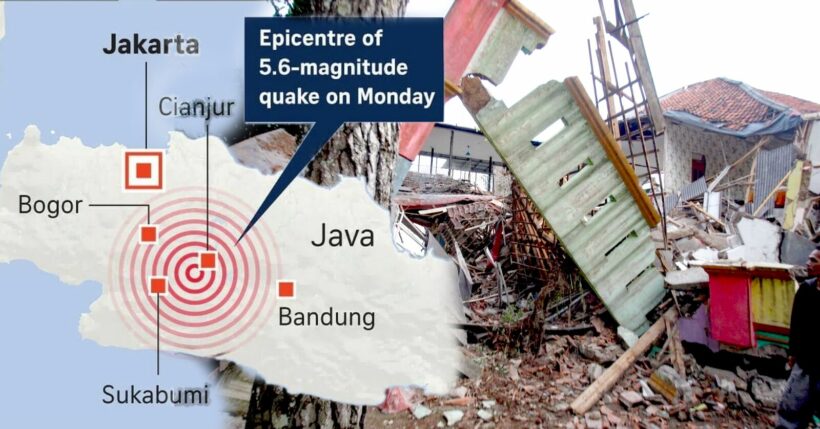 PHOTO: The death toll has climbed after a devastating earthquake in Indonesia. (via Complex)

Searches continue for survivors of the massive earthquake in Indonesia. The death toll has now climbed to over 160 people. The quake struck in Cianjur, about 75 kilometres southeast of Jakarta, at a depth of 10 kilometres and lasted for about one minute.

The earthquake measured 5.6 on the Richter scale with the epicentre in the mountains of West Java. Some 2.5 million people inhabit the area. The governor of West Java said that they have recorded 326 injuries and 162 deaths from the significant tremor so far. The disaster mitigation agency of Indonesia still lists the number as much lower though, having not updated from yesterday’s estimate of 62 dead.

The agency’s spokesperson said searches for survivors would continue throughout the night. There are at least 25 people suspected to be still trapped under the rubble of collapsed buildings. Authorities warn that the death toll from the earthquake could continue to rise as many structures have collapsed.

The disaster agency has reported that at least 2,200 homes were damaged and 5,300 people were displaced, though the government puts that number closer to 13,000 people. Many people living in rural areas have not been accounted for yet, according to the agency.

“There are residents trapped in isolated places … so we are under the assumption that the number of injured and deaths will rise with time.”

Hospitals were still being filled with ambulances arriving all night, and more people were being treated in the hospital parking lot with an emergency tent setup. Displaced people were being moved to different evacuation centres around the area. Many locals simply laid mats on the ground or in tents in open spaces after all the buildings nearby had crumbled to nothing.

Many details are still emerging as communication is hampered by damages from the earthquake. Electricity was knocked out, and landslides isolated some areas, blocking the roads to evacuate residents. And there may be more problems ahead. The governor reported 88 aftershocks so far and if heavy rains hit, the national weather service predicts the ground will give way to more landslides.

The earthquake was relatively shallow, just 10 kilometres under the land surface. Damage is still being assessed as narratives from locals describe walls crumbling around them and parents searching the rubble of their homes for missing children.

Indonesia sits in the infamous “Pacific Ring of Fire” where the earth’s plates meet and rub together, causing volcanoes and earthquakes frequently. In 2004, the Boxing Day tsunami that killed 226,000 people in 14 countries was triggered by a 9.1 magnitude earthquake off Indonesia’s Sumatra Island.

Many children among 268 dead in Indonesian earthquake

Earthquake kills at least 46 in Indonesia