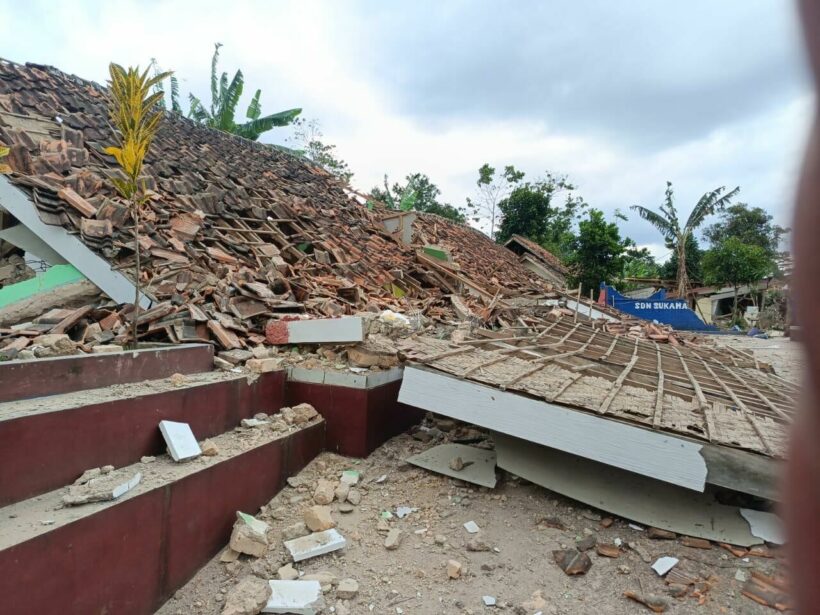 A 5.6 magnitude earthquake struck West Java in Indonesia this afternoon, killing at least 46 people. Over 700 injuries have been reported so far. The death toll is likely to rise, according to the Indonesian Disaster Agency.

The quake struck in Cianjur, about 100 kilometres southeast of Jakarta, at a depth of 10 kilometres and lasted for about one minute.

The majority of deaths were caused by buildings collapsing on top of people, according to Herman Suherman, a government official from Cianjur.

The earthquake hit at 1.21pm local time and was felt as far away as Singapore, reports say. There were 25 aftershocks but no tsunami warnings.

Patients had to be evacuated out of Cianjur Hospital on stretchers amid fears the building could collapse. The quake caused significant damage to infrastructure in the area, including a hospital and an Islamic school.

Cianjur is a densely populated area prone to landslides with poorly-built houses. Most of the houses have turned to rubble, locals say.

The earthquake caused a landslide on the outskirts of Cianjur, cutting off road access from the neighbouring Puncak Pass, according to Indonesia’s Meteorological, Climatological, and Geophysical Agency. Lack of access to Jianpur is likely to be an issue, said the department.

Residents in Jakarta – around 100 kilometres away from the epicentre – reported feeling “significant shaking.” As did residents in the neighbouring cities of Sukabumi and Bandung.

Indonesia is a hotbed for seismic activity because it lies on the “Pacific Ring of Fire” where tectonic plates meet beneath the earth’s surface.

Every year, more than 1000 earthquakes with varying magnitudes strike Indonesia, ranging from minor to damaging.

In February, an earthquake of the same magnitude killed at least 25 people and injured more than 460 in West Sumatra province.

In January last year, an earthquake of the same magnitude killed more than 100 people and injured around 6,500 people in West Sulawesi province.