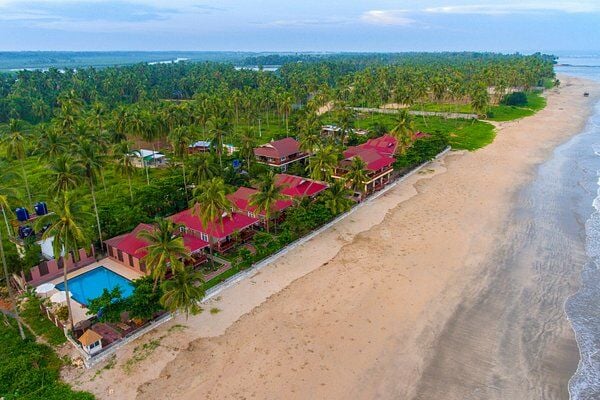 A boat carrying at least 90 Rohingya refugees from Myanmar’s Rakhine state to Malaysia capsized off the coast of Myanmar on Saturday, killing at least 14 people, mostly children. More than 50 passengers remain missing after the boat capsized during a storm and 23 survivors were detained by police in Pathein district in Myanmar’s Ayeryarwady region. The UN reports that at least 17 passengers are feared dead.

The refugees, fleeing persecution by the Burmese junta, paid traffickers 1,500 – 2,500 USD each to get to Malaysia via boat, where they hoped to find employment, some survivors told Radio Free Asia.

Seven bodies washed up on Sunday near the popular Shwe Thaung Yan beach in Pathein district. A local resident said…

Six more bodies were found in wetland areas nearby on Sunday afternoon and another body washed up on the shore of a nearby beach.

According to local residents, the Rohingya refugees were trying to make their way to Myanmar from displacement camps in Rakhine’s Sittwe, Buthidaung and Maungdaw townships.

Benar News reported that the Burmese junta still consider the Rohingya as illegal immigrants from Bangladesh, even if they are born in Myanmar. A spokesperson for the junta said…

“A search was carried out and found 14 Bengalis dead. The rest will be deported as usual.”

“We checked them and found them to be human traffickers. They were bringing these Bengalis from Rakhine’s Rathedaung by boat to go to Yangon and then to Malaysia.”

Every year, at least 1000 Rohingya have left internal displacement camps, due to bad conditions, lack of human rights and lack of work, in an effort to begin a new life in a different country. Over the past decade, thousands of Rohingya have left by sea from refugee camps in Cox’s Bazar, Bangladesh and Rakhine State in Myanmar.

“The latest tragedy shows once again the sense of desperation being felt by Rohingya in Myanmar and in the region… It is shocking to see increasing numbers of children, women and men embarking on these dangerous journeys and eventually losing their lives,” said Indrika Ratwatte from the UN’s refugee agency, UNHCR.

“The root causes of these deadly journeys need to be addressed… Additionally, all countries in the region must come together to ensure the rescue and disembarkation of all those in distress at sea.”

The UNHCR warns, “collective failure to act will continue to lead to tragic and fatal consequences. It is imperative to take action against criminals, smugglers and traffickers who prey on the most vulnerable.”

In March, Burmese police arrested 41 Rohingya in Shwe Taung Yan’s Nwe Nyo Chaung village who were stranded on the beach after their boat broke down.