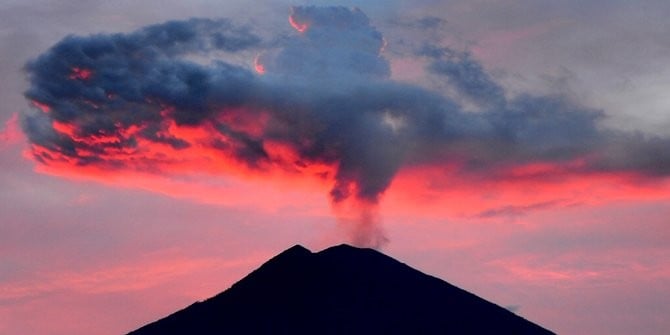 Sitting in the KLIA Terminal in Kuala Lumpur, the announcement comes over the PA.

“Passengers are advised that the fight from KL to Bali has been cancelled.”

Thousands of tourists are now stranded as the international airport closes following more eruptions from  Mount Agung. People on the island report a thick plume of ash and smoke thousands of metres into the sky.

The airport closed earlier this morning and has forced the cancellation of up to 280 flights. Officials say the cancellations are affecting up to 16,000 passengers so far. A pilot reported traces of volcanic ash at a height of 23,000 feet, according to an AFP report.

The current travel chaos follows a similar disruption back in November when the airport was again closed with thousands of stranded tourists and cancelled flights disrupted travel plans and the Indonesian island’s tourism economy.

Mount Agung is about 75 kilometres from the main tourist hub on the island, Kuta Beach. At the moment there is a four kilometre no-go-zone around the volcanic mountain.