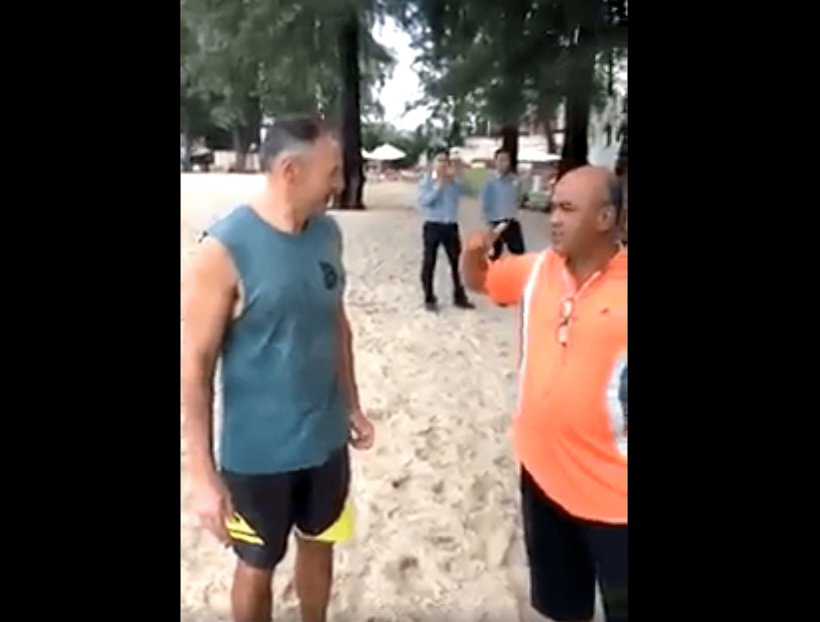 The video of Facebook user Aziz Yotharak, who uploaded a post of a tourist being asked to move from the ‘private’ beach in front of Dusit Thani Laguna Phuket, has gone viral whilst the resort denies that they ordered the staff to chase the tourist and his children off the beach.

The video shows the tourist with two children sitting on a mat on the beach in front of Dusit Thani Laguna Phuket, being asked from the staff of the resort to move out as the space is ‘private property’. The tourist also comments on the video that the beach ‘cannot possibly belong to a hotel’.

Meanwhile, Ma-Ann Samran, President of the Cherngtalay OrBorTor, has commented on the matter saying that he went to discuss the matter with hotel management.

“The staff said that the General Manager only ordered the staff at the scene to inform the tourist that if he wants to use the facility of the resort such as swimming pool he has to buy the day-pass voucher, but denied to have ordered the tourist to move away from the beach. However, the staff didn’t forced the tourist away, as it creates a bad tourism image for Phuket,” said Ma-Ann.

“However, after checking thoroughly, the beach that appears to be public land, is covered in the resort’s land deed all the way to the sea. I have reported this matter to the Governor as it is a case study. The beach areas are the responsibility of the Marine Office. Just like me, everyone believes this is public land.”

“There are many spots in Cherngtalay that have the same issue. The departments involved need to find a solution that will ensure that people and businesses share the beach together.”

MONDAY MORNING HEADLINES – All your local news in 3 minutes