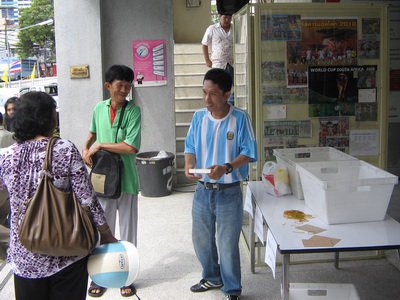 PHUKET: There was a lot of activity at the Phuket post offices this morning as people from all walks of life dropped off batches of postcards bearing their picks on who will win the World Cup 2010 final that kicks off in South Africa at 1:30am on Monday.

A clear majority think Spain will win the match.

The punters are hoping for a share of the 40-million-baht prize money on offer as part of a World Cup sweepstakes organized jointly by Thailand Post and the Thai Rath newspaper.

Postal worker Bhuritt Sukchit, who was accepting the completed postcards and packing them into plastic cases in front of the main post office in Phuket Town, said the province would postmark nearly all of the 1.1 million postcards available in the province.

Mr Bhuritt was filling the large plastic crates at a rate of about one every half hour and people were handing over batches to him every few minutes.

Dressed in an Argentina shirt, the postal worker said about 60% of those sending off the cards had chosen Spain to about 40% for the Dutch side.

There are also many tents set up in the area selling various products and services.

Mr Haw Sae-eu, a 66-year-old motorcycle taxi driver at the queue near the technical college on Thepkrasattri Road, said he was dividing his 20 postcards evenly among the two finalists to ensure himself some chance at a prize.

Asked if he would stay up to watch the final live, the former resident of Surat Thani said he would watch a re-run later the same day.

“I’ll watch it when I get up. I am old and need a lot of rest so I can have the energy to get up and work in the morning,” he said.

In addition to the nationwide sweepstakes, Thailand Post is running spin-off lucky draws at the provincial level.

Those who buy packs of 200 two-baht postcards will be given a coupon to participate in a provincial lucky draw with a top prize of four million baht.

The lucky draw will be held on July 14 and winners will be contacted at a later date.

For more information about how the sweepstakes works, click here.