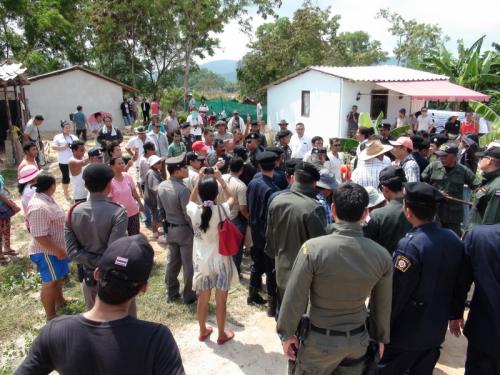 PHUKET: Villagers fighting a land claim to 83 rai near an old tin mine in Chalong say they have turned to the Prime Minister’s Office to settle the dispute, in which they claim to have lived at the site for nearly a decade.

The move to appeal to the Prime Minister’s Office follows more than 50 villagers turning out in force yesterday in their second attempt to stop Land Office surveyors from confirming the boundaries of the plot in question.

“The first time was at the end of January,” Col Arun said.

When that survey was attempted, more than 60 police officers were called in to calm the villagers down (story here).

However, police led by Phuket Provincial Police Deputy Superintendent Arun Kaewvatee were on hand to ensure the survey was conducted this time.

“The plot is located next to 100 rai of land near the old Chao Fa mine in Soi Song Kun, in the Klong Mudong area [map here],” Lt Col Arun explained.

The dispute over the land came to a head when Prajit Hongyok requested the Land Office confirm the boundaries to an 83-rai plot which he claims he has owned for decades.

He has presented a Chanote title deed as evidence to his claim.

However, the villagers dispute Mr Prajit’s claim is legitimate, as they say the land is nothing but “wasteland” that they have squatted on for nearly 10 years.

Land Surveyor Surakij Rachataramayakorn told the Gazette that the survey conducted yesterday followed Mr Prajit filing a police complaint against the villagers after he asked them to vacate the land on February 14.

“Mr Prajit and three of his friends came and presented the land ownership documents, asking the villagers to move out,” Mr Surakij said.

“However, villagers led by Ronhem Sangkhao staged a protest to prevent us from carrying out the survey. He claimed that he and other villagers have been living on the land for almost 10 years.

Mr Ronhem claimed that he and the villagers have filed complaints to several organizations, but have received no response.

“Recently we filed a complaint to the Prime Minister’s Office,” he said.

“If the land ownership documents prove to be legally issued, the other villagers and I are willing to relocate,” he said.